With changing times, come changing lifestyles. With changing lifestyles, come changing demands on spaces. This was the impetus for this project, the transformation of a 60-year-old apartment that had seen no changes from the time the owners had taken first possession of it from the builder. The lifestyle then followed traditional ways, with segregation of ablution spaces from sleeping areas and a strict compartmentalization between family members and cleaning staff — ways that became obsolete in a modern age. Additionally, with the evolution in lifestyle, space was not able to fit in most of the modern day requirements which were needed by the family. The functional requirements from the family of five — a couple with three children — specified four bedrooms, living room, dining room, kitchen, entertainment room and staff quarters. 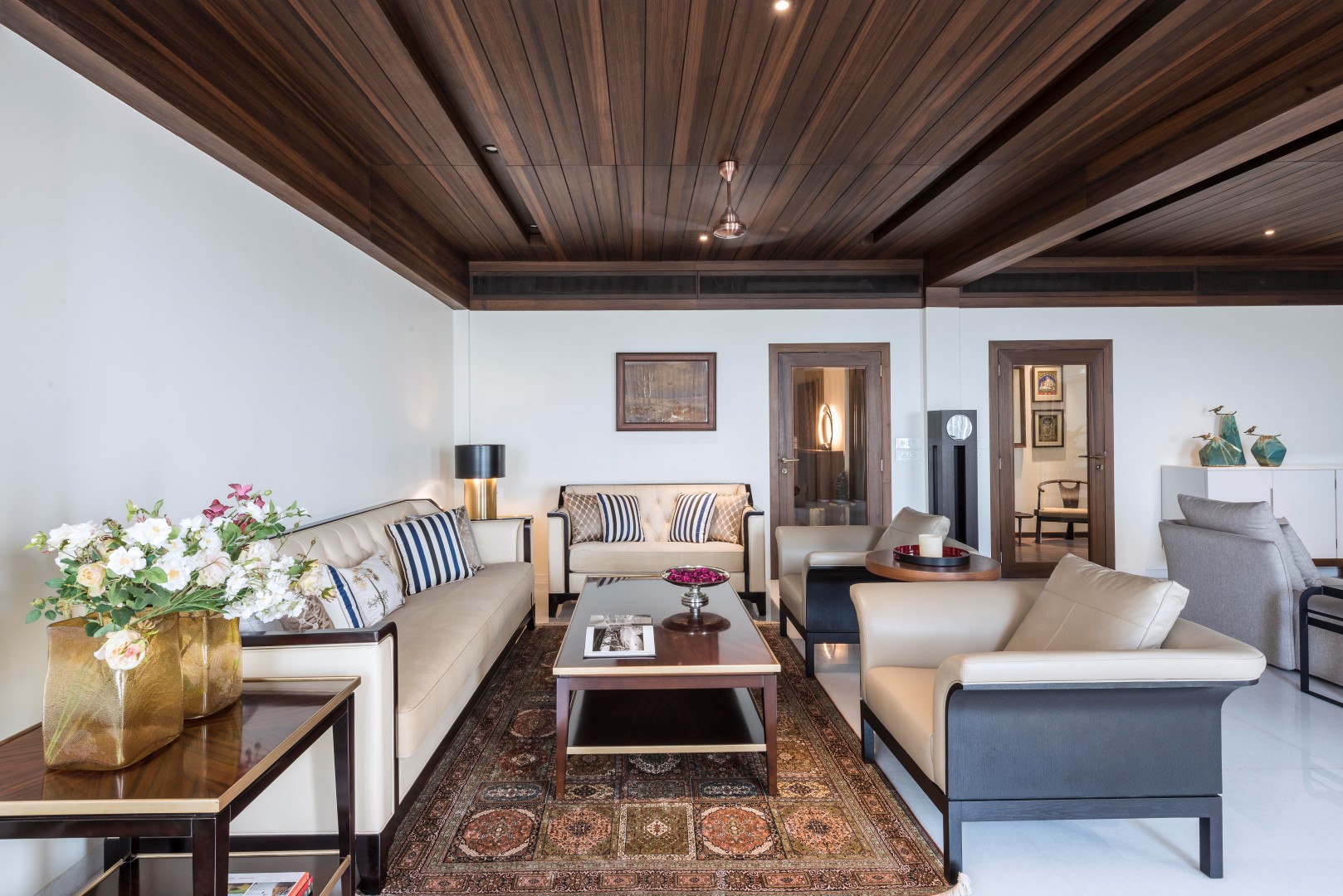 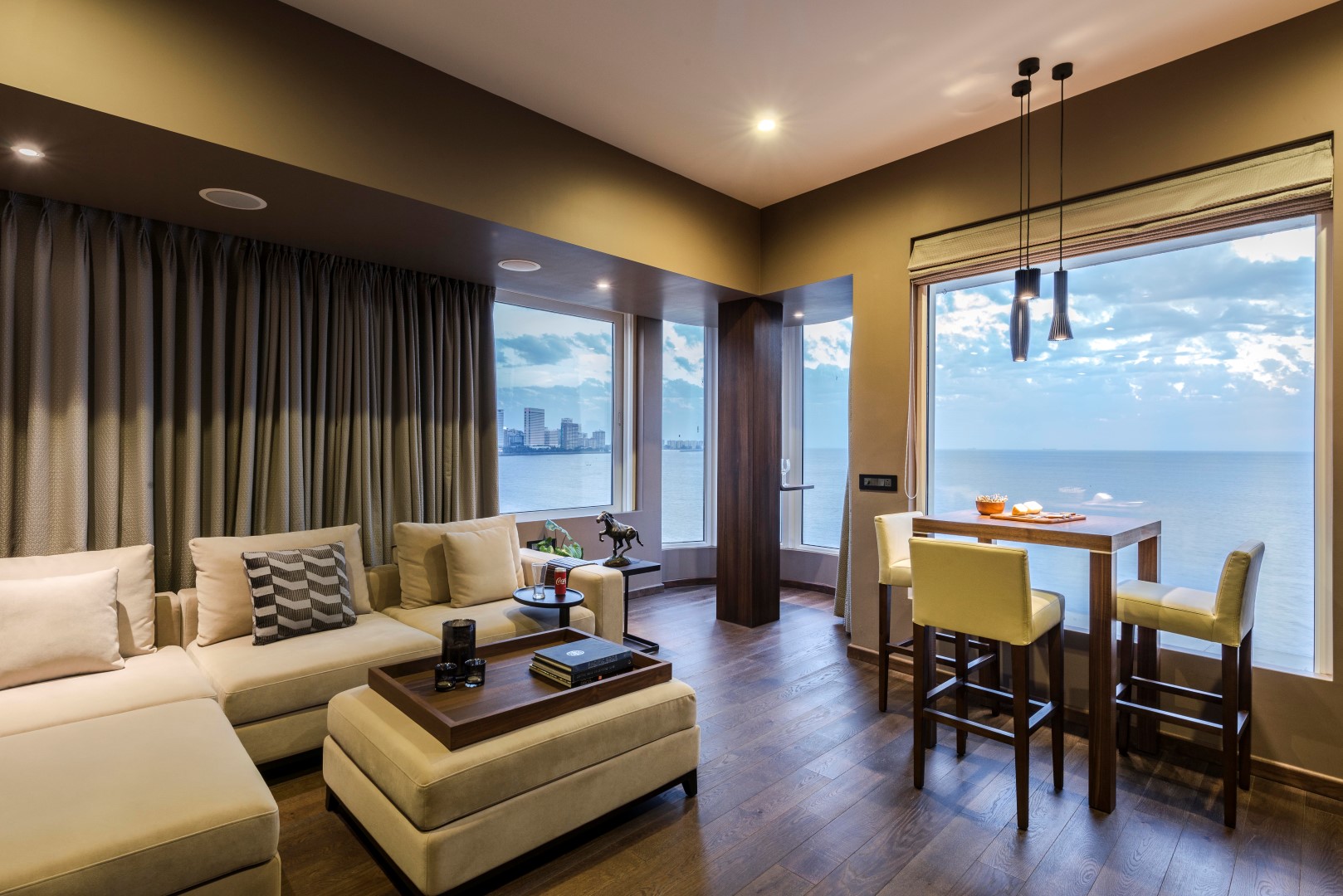 The architects’ idea, while fulfilling these requirements, was also to give their clients a  modern, chic house which is equipped with all the modern amenities of today. The existing spatial programme of bathrooms as spaces unconnected to bedrooms with two doors (one from inside; and the other from the outside as an access for the staff) was realigned through extensive civil work. 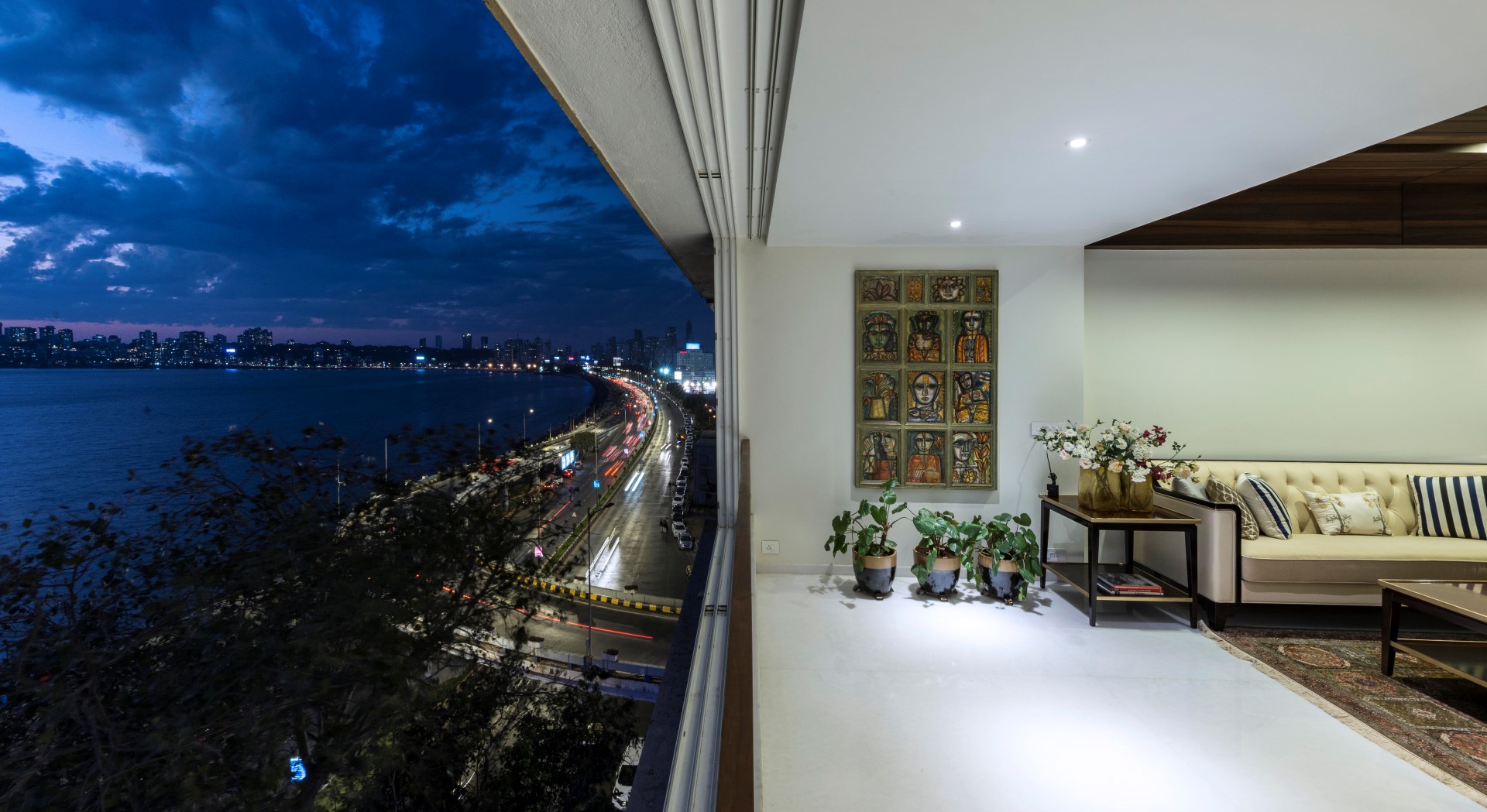 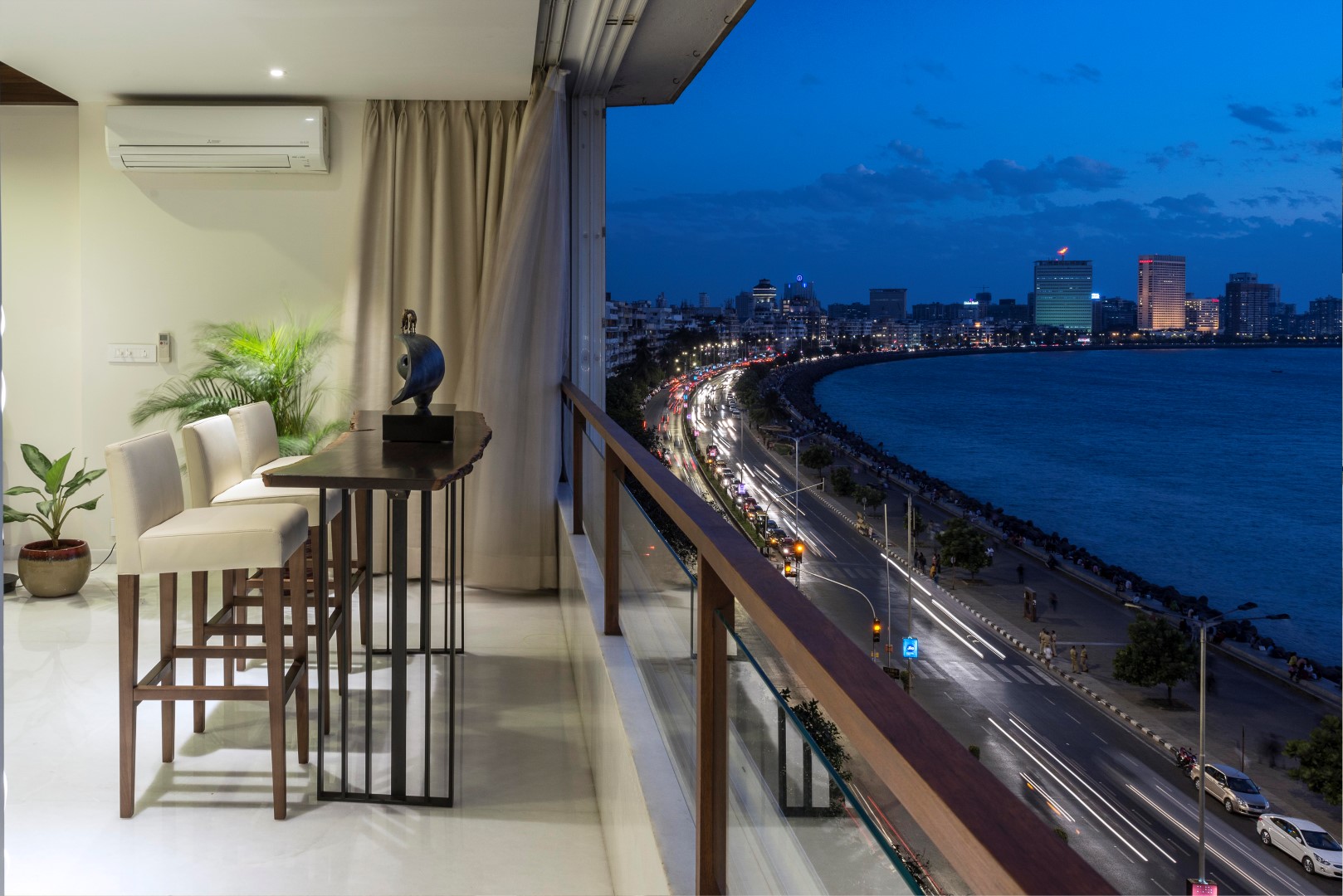 While the new configuration optimised usage, it also took into account the fact that the apartment faced the sea — and therefore ensured that the primary spaces (the living room, entertainment room, all the bedrooms)took advantage of this asset. The secondary rooms — kitchen, staff room with toilets (ladies and gents) and mandir — were arranged behind the primary zone. The weaving of the sea view into the internal environment formed the most challenging aspect of the assignment. 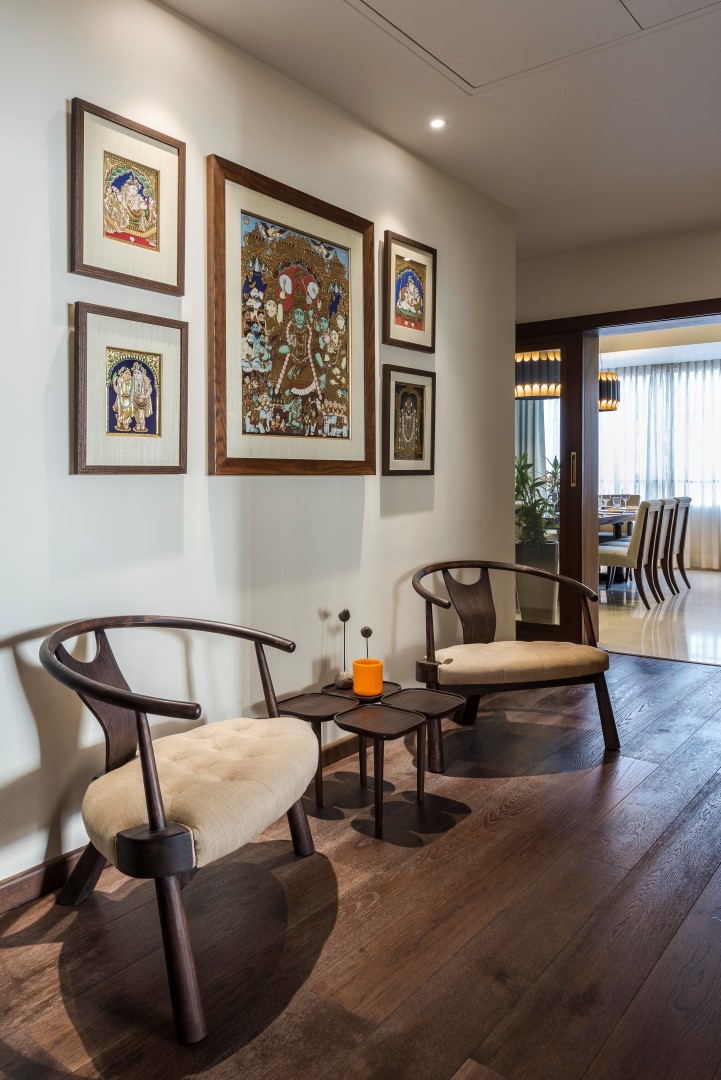 The modern, chic aesthetic was translated as a neutral palette for the public areas, while individual bedrooms were customised to the occupant’s preference. 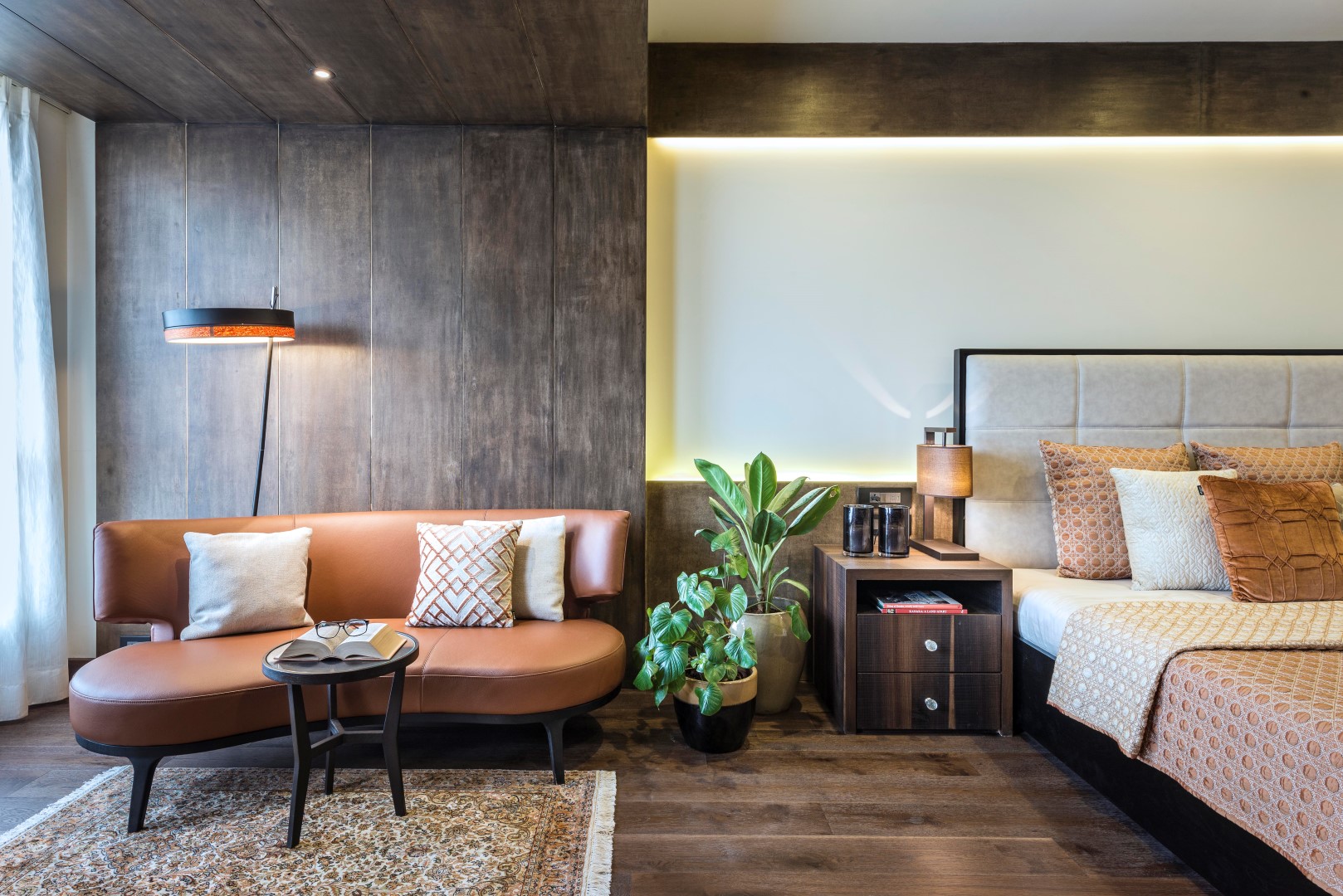 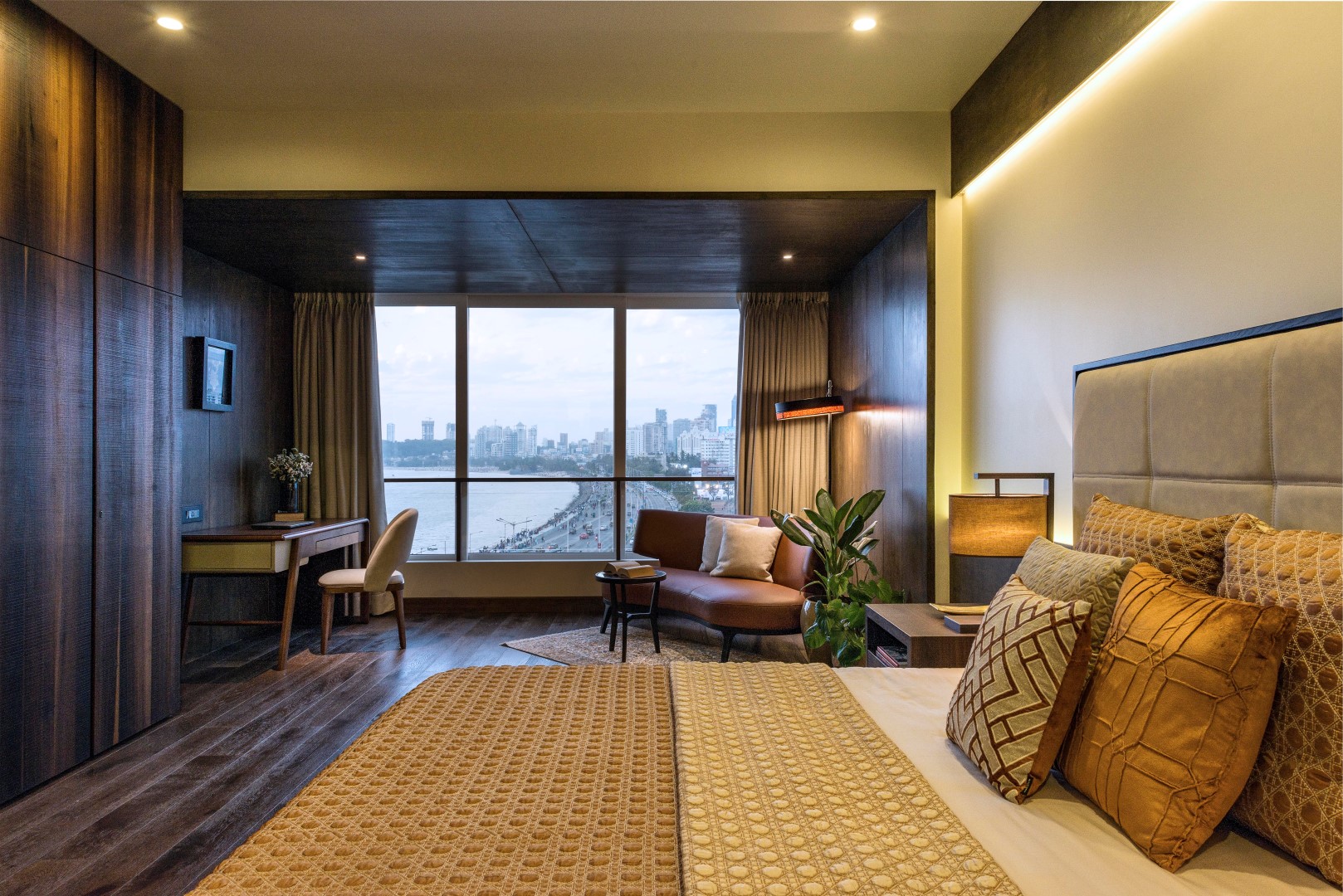 For instance, one daughter wanted a minimal, all-white room with a little dash of colour (blush and grey); while the second daughter wanted rose gold, grey and light grey. Similarly, the son’s room was realised with blue as the dominant colour and master room was rendered in neutral shades. The interior treatment sees meticulous attention to detail and material play. The mandir, for example, features hand-cut marble jaali frames (customized ) from Sompura. The architects have sandwiched handwoven cutwork fabric in partitions to increase the privacy and still make them look lighter.In one of the daughter’s bedrooms, the wall behind the bed is clad customized wallpaper from Murals (London) with a special ombre effect. Cement sheets with a clear coat of Monocoat distinguish the master bedroom, while all the bathrooms have highlighter Italian marble used as an accent piece in the wall cladding. 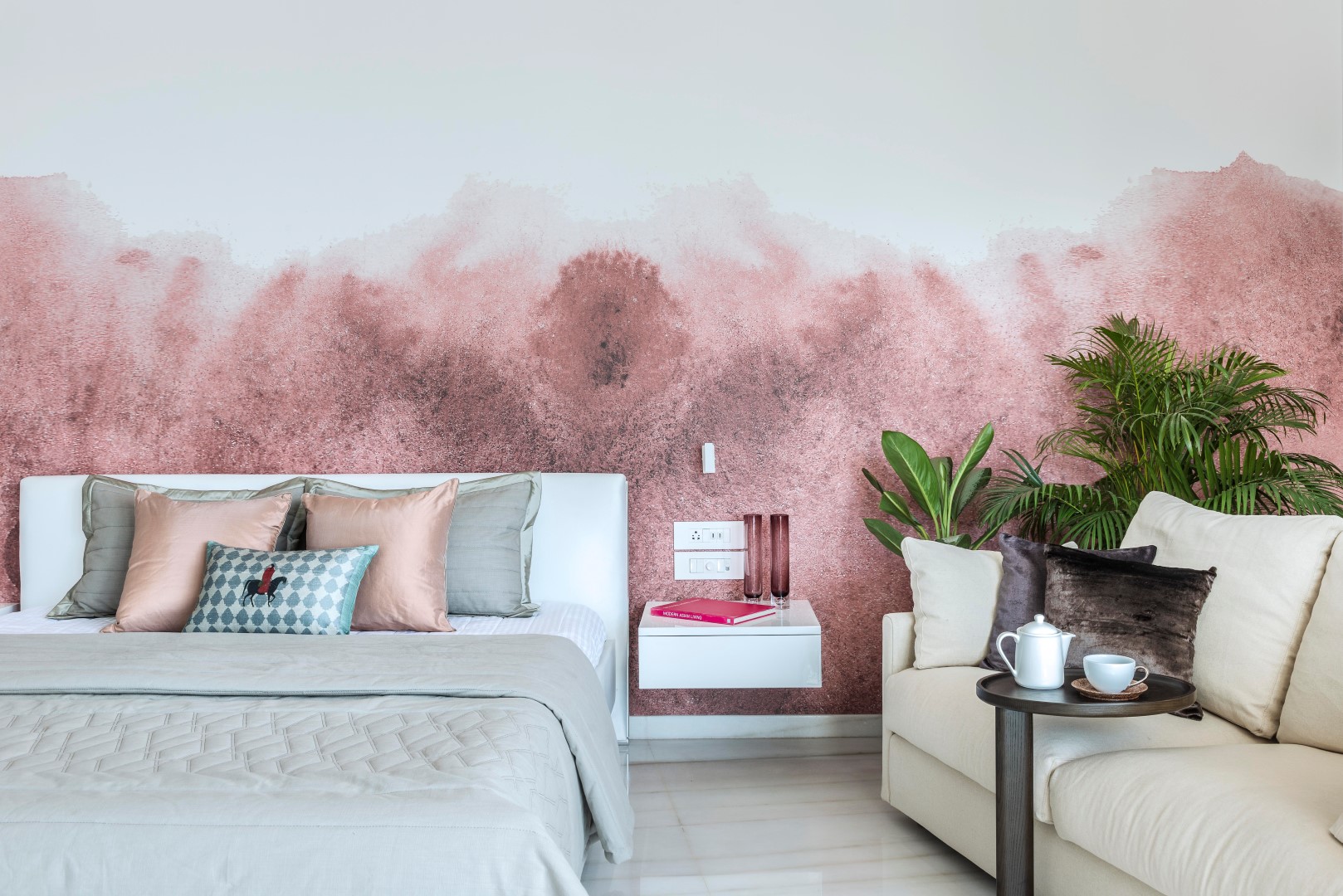 To create the requisite warmth, lighting throughout the house is effected in yellow lights, with the strategy featuring a combination of ambient, spots and pendants, as per the requirement of the design and space. 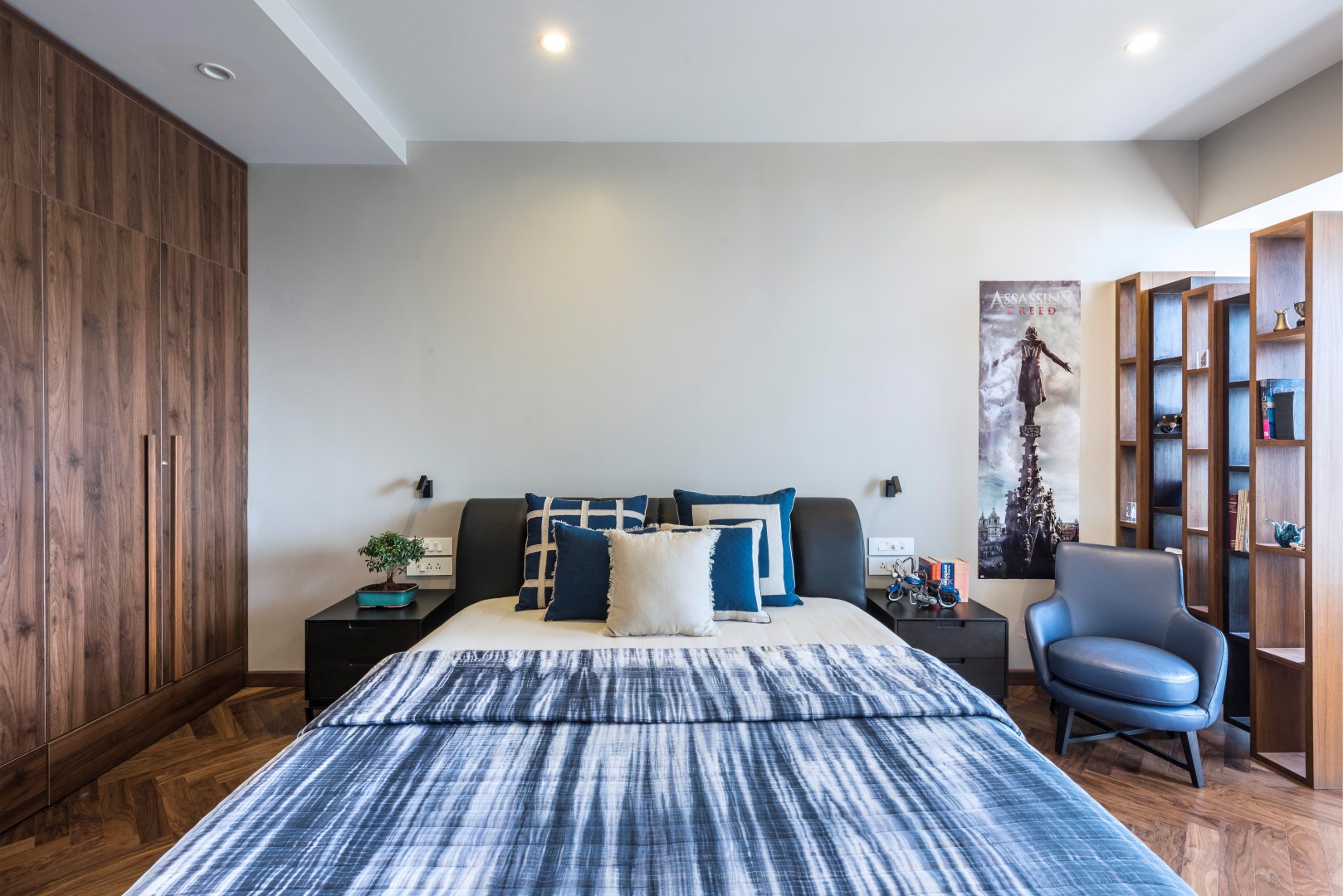 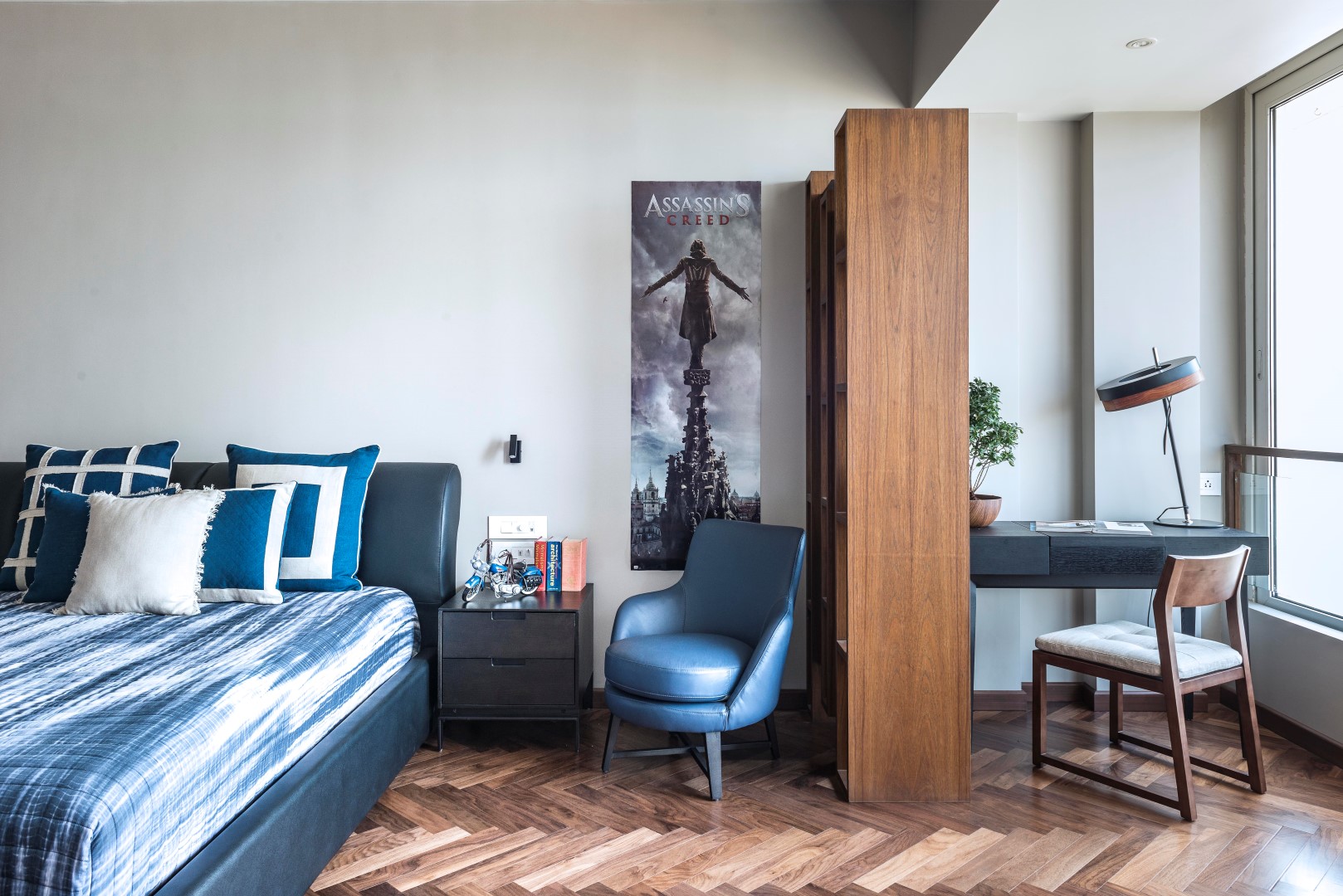 The exercise of reimagining the space has been successful — so successful, in fact, that the clients find it difficult to remember what it was originally! 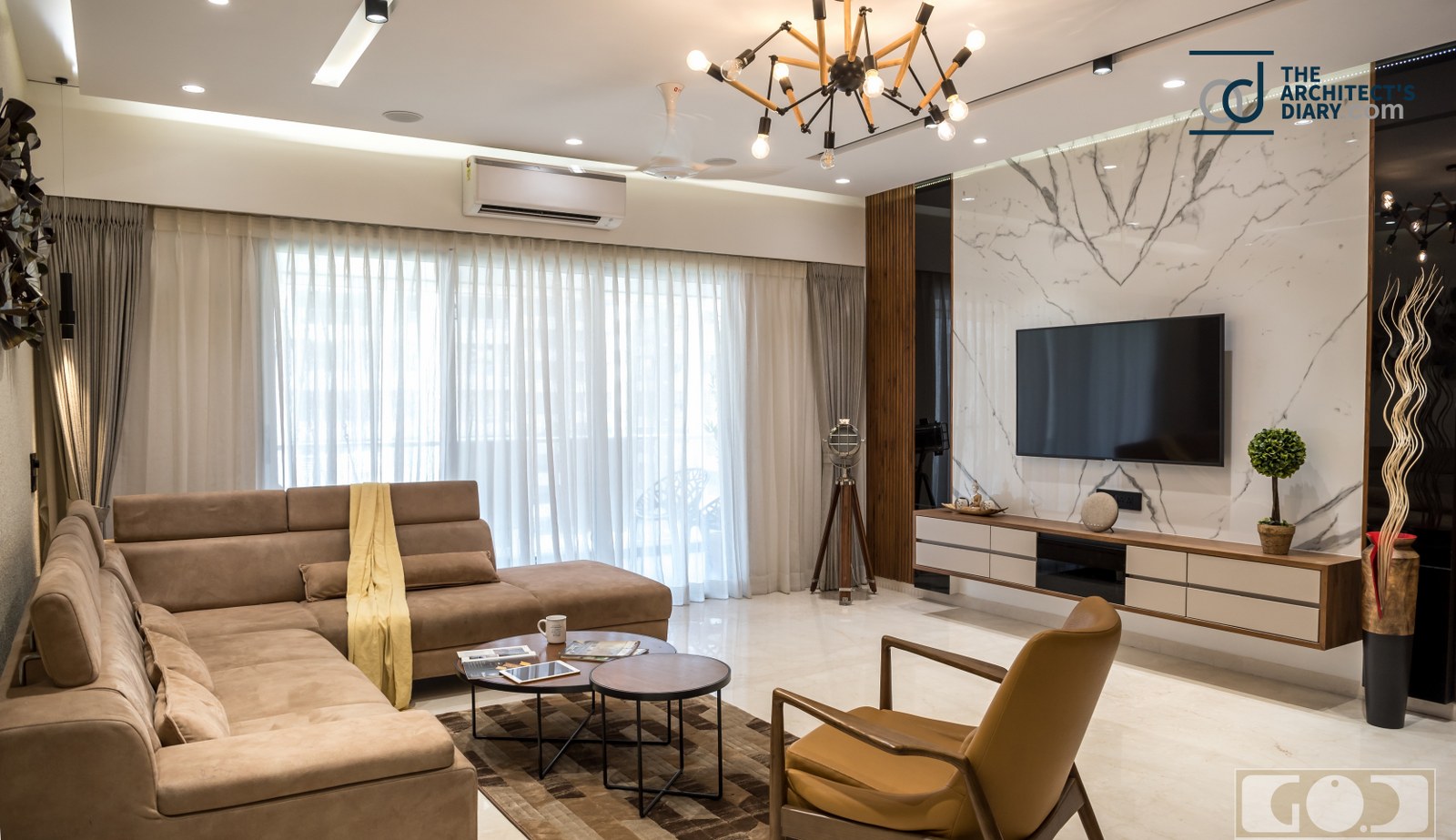 An Apartment Interior With Contemporary And Minimalist Functions | Group Of Design 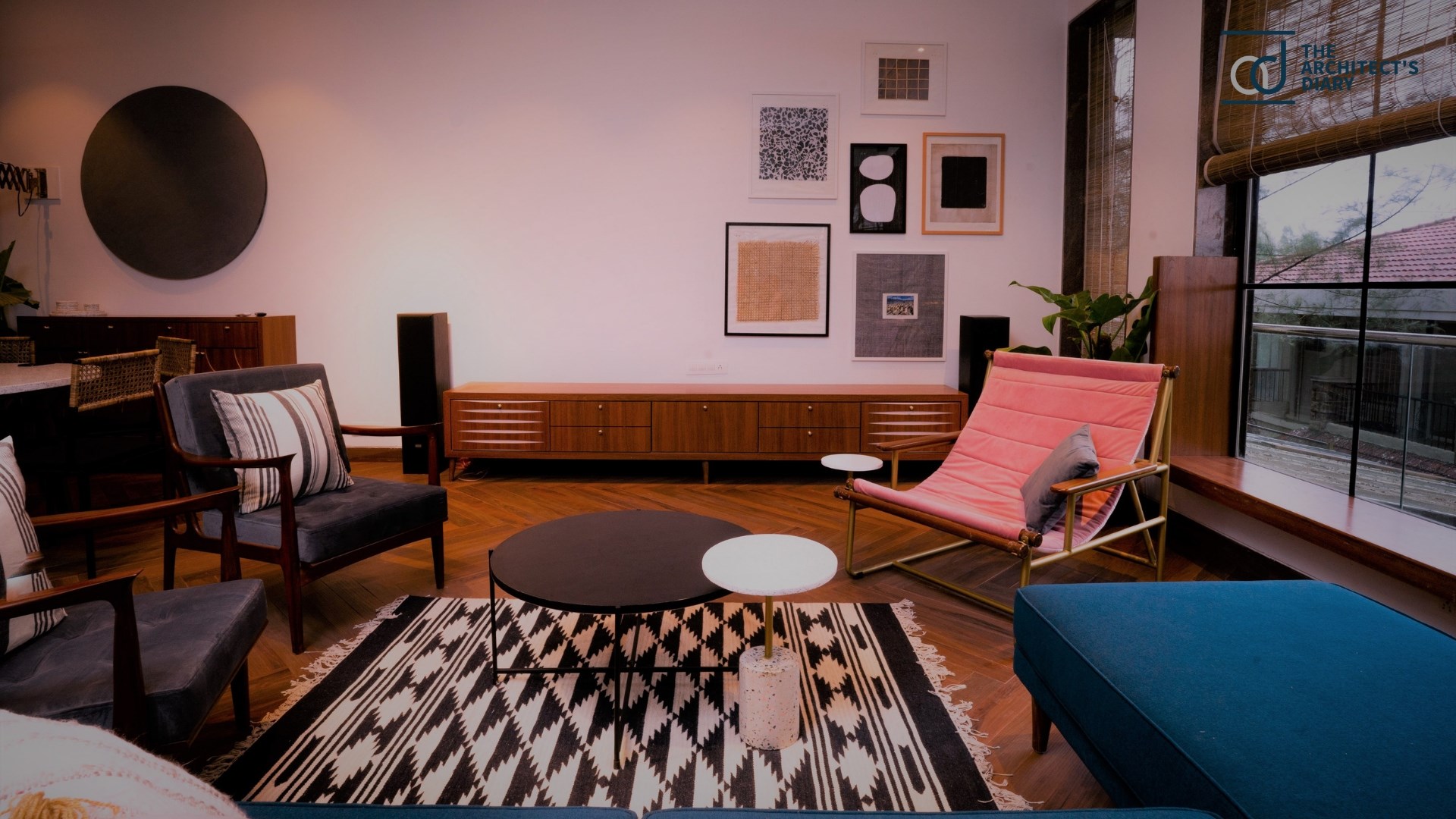 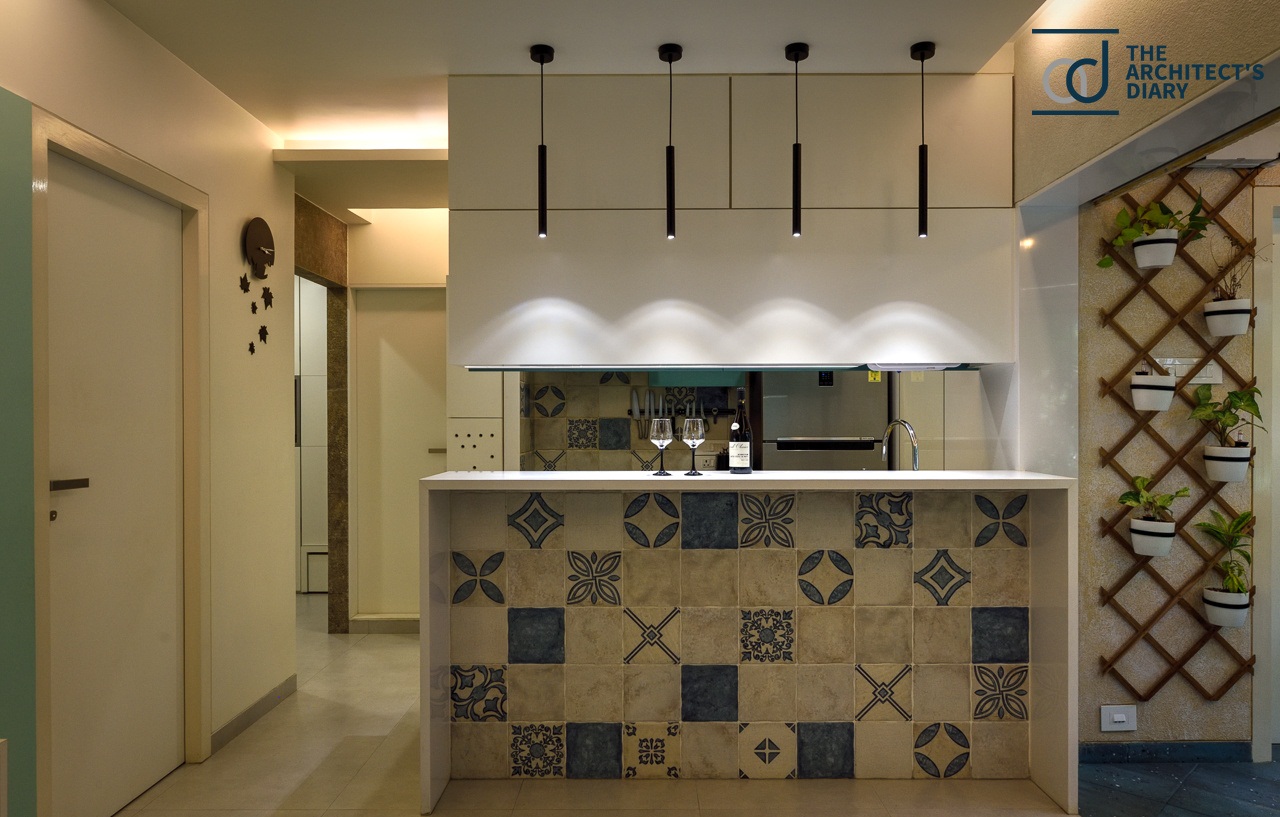 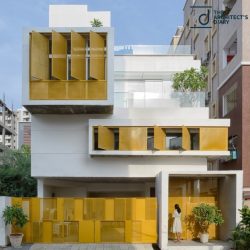 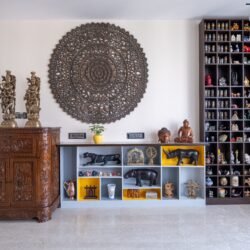 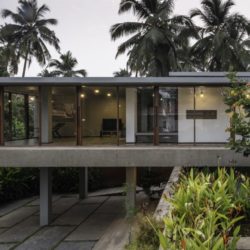 Lightness Of Being | Thought parallels architecture 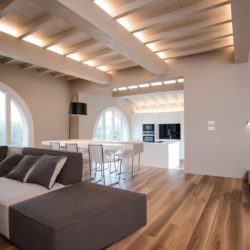