In the Okhla Industrial Area of New Delhi, Studio Bipolar has reimagined a former 60’s era pharmaceutical warehouse into a new 6000 square feet office and film studio for a creative agency, named ‘WhiteBalance’. 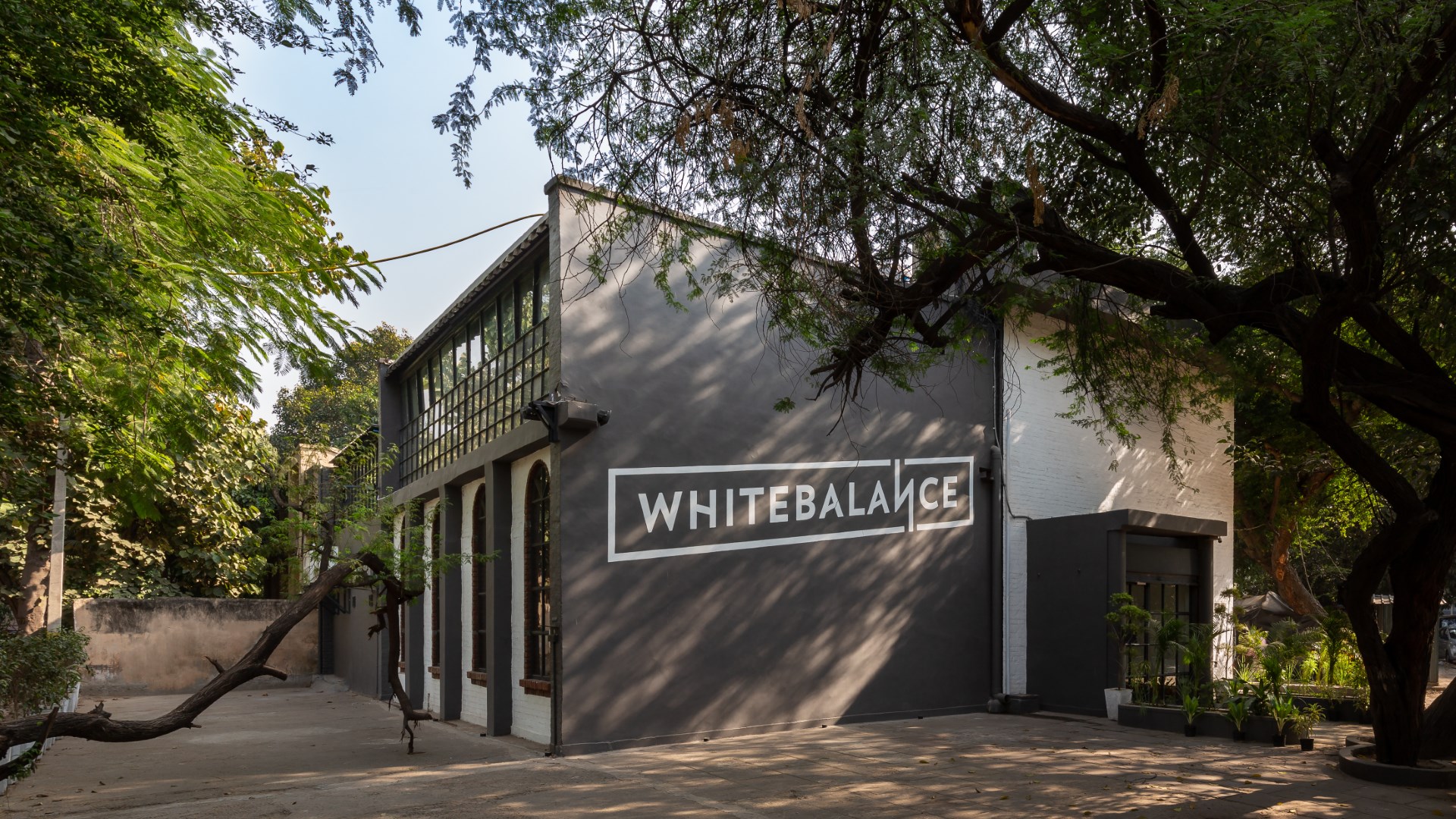 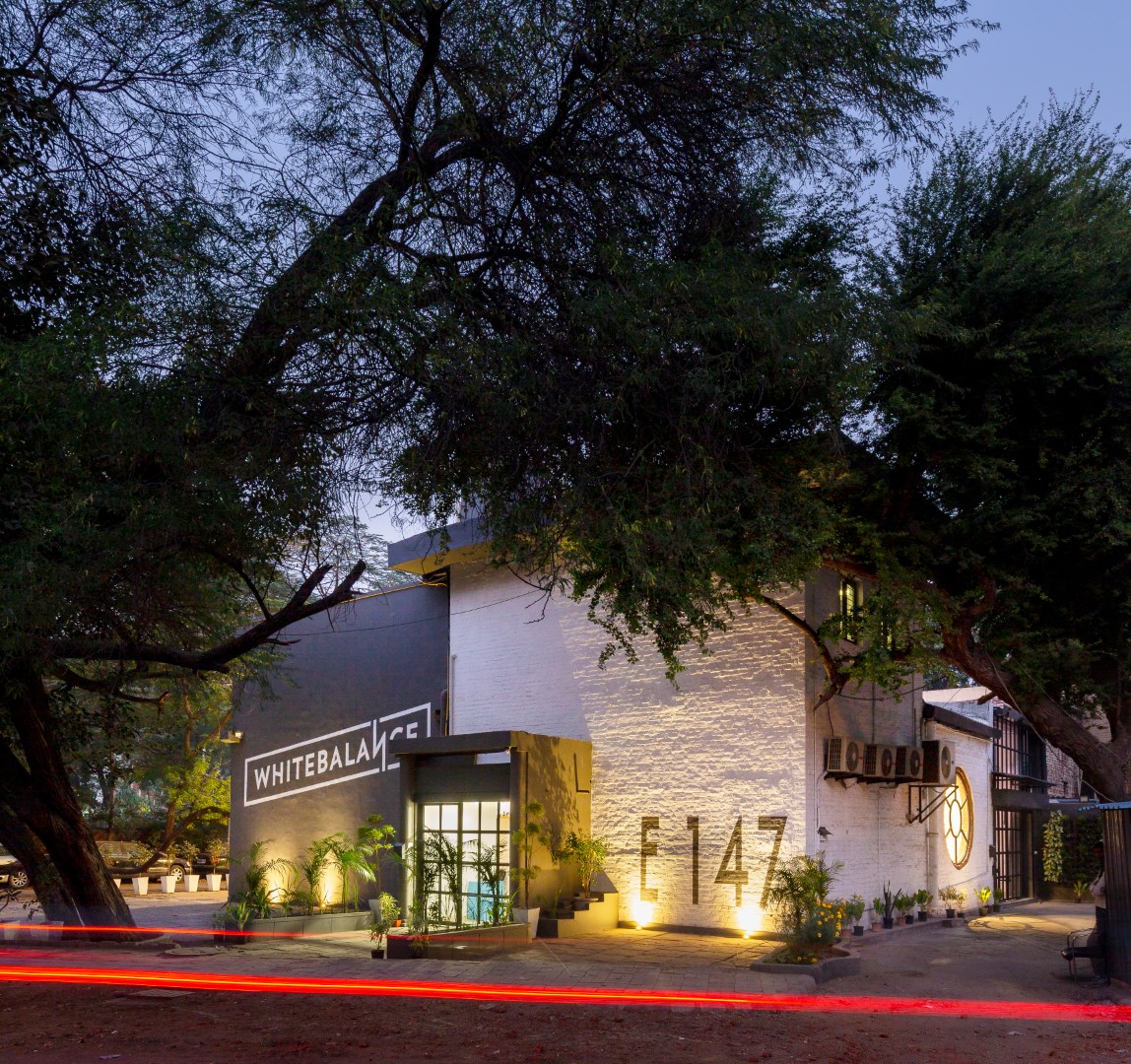 The existing structure was one of dormant beauty. Be it the angular trusses supporting the asbestos roof, or the 14 inch thick exposed brick walls. These were to be the crux for the whole design to follow. A large mezzanine covered almost two thirds of the area and which was demolished entirely to showcase the towering trusses overhead. Another smaller one was built intelligently to provide for maximum viewing angles while not acting as an obstruction. 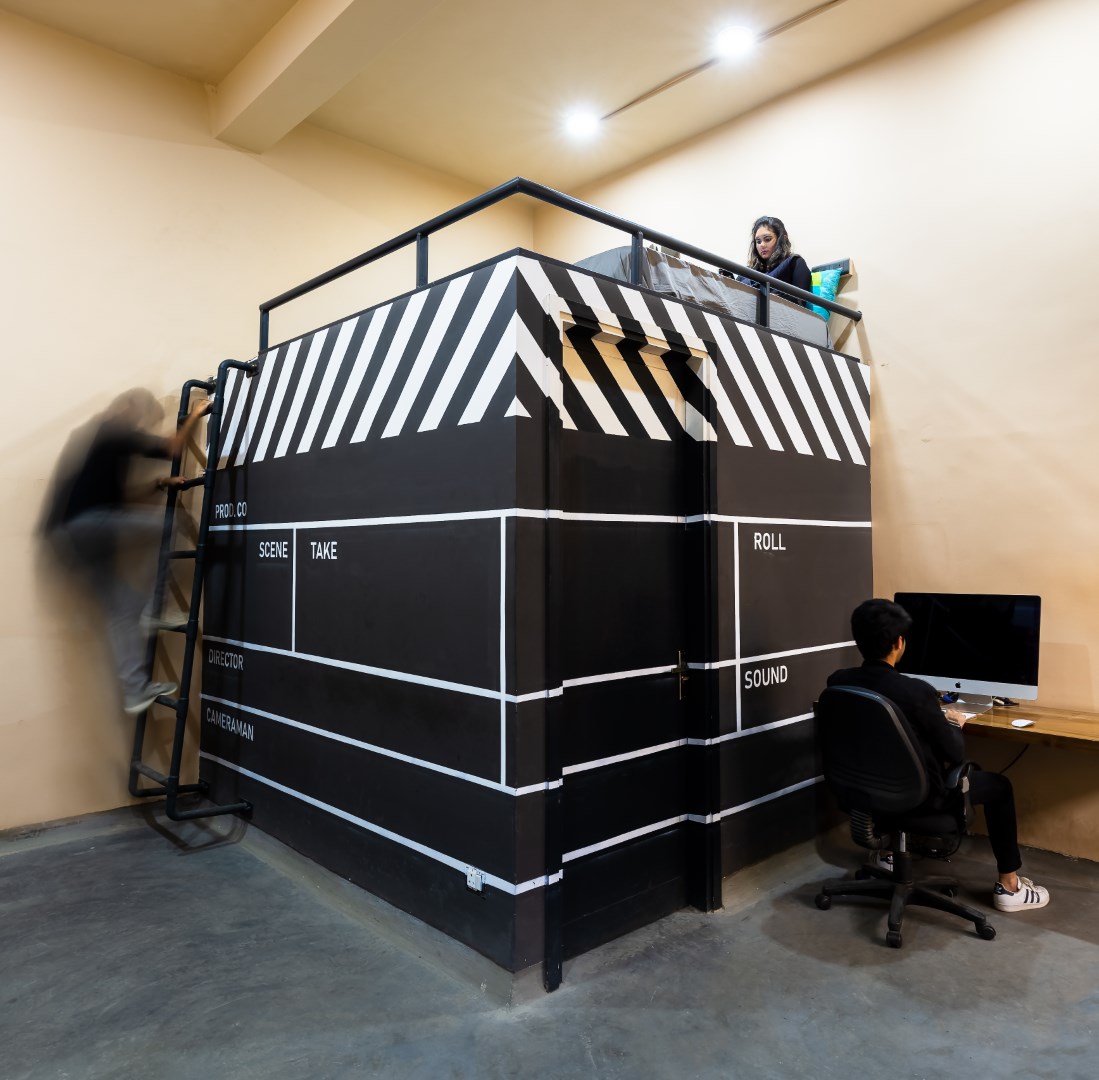 An existing 2’ thick wall divided the space even further, and was removed to connect the space horizontally as well as vertically. The concept was a simple one; ‘No Visual obstructions’; ‘One space’. Adjacent Halls were interconnected through arched entries to create a workspace for the editing team. A sleeping nook was created above the private editing suite for this team that likes to work late hours into the night. 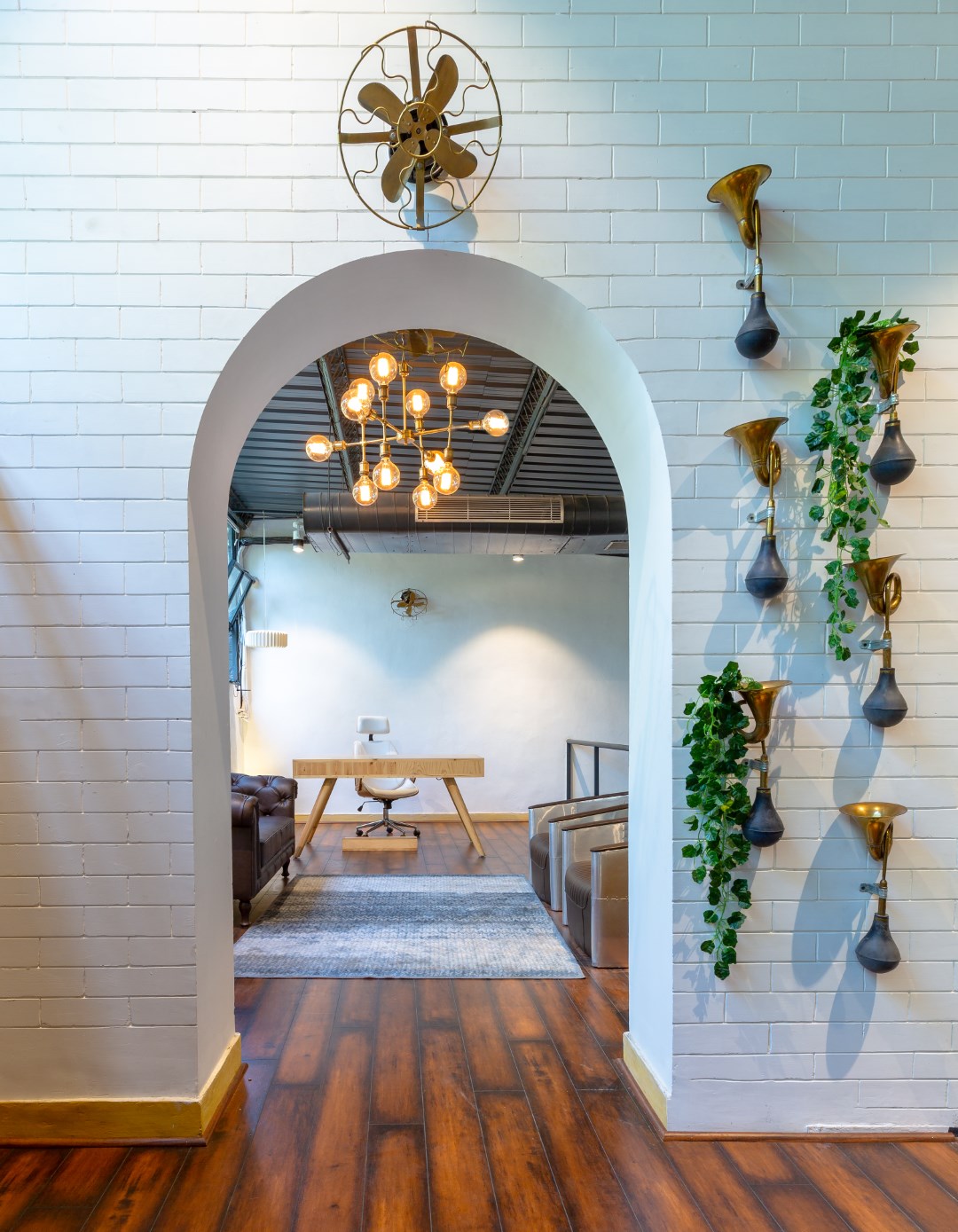 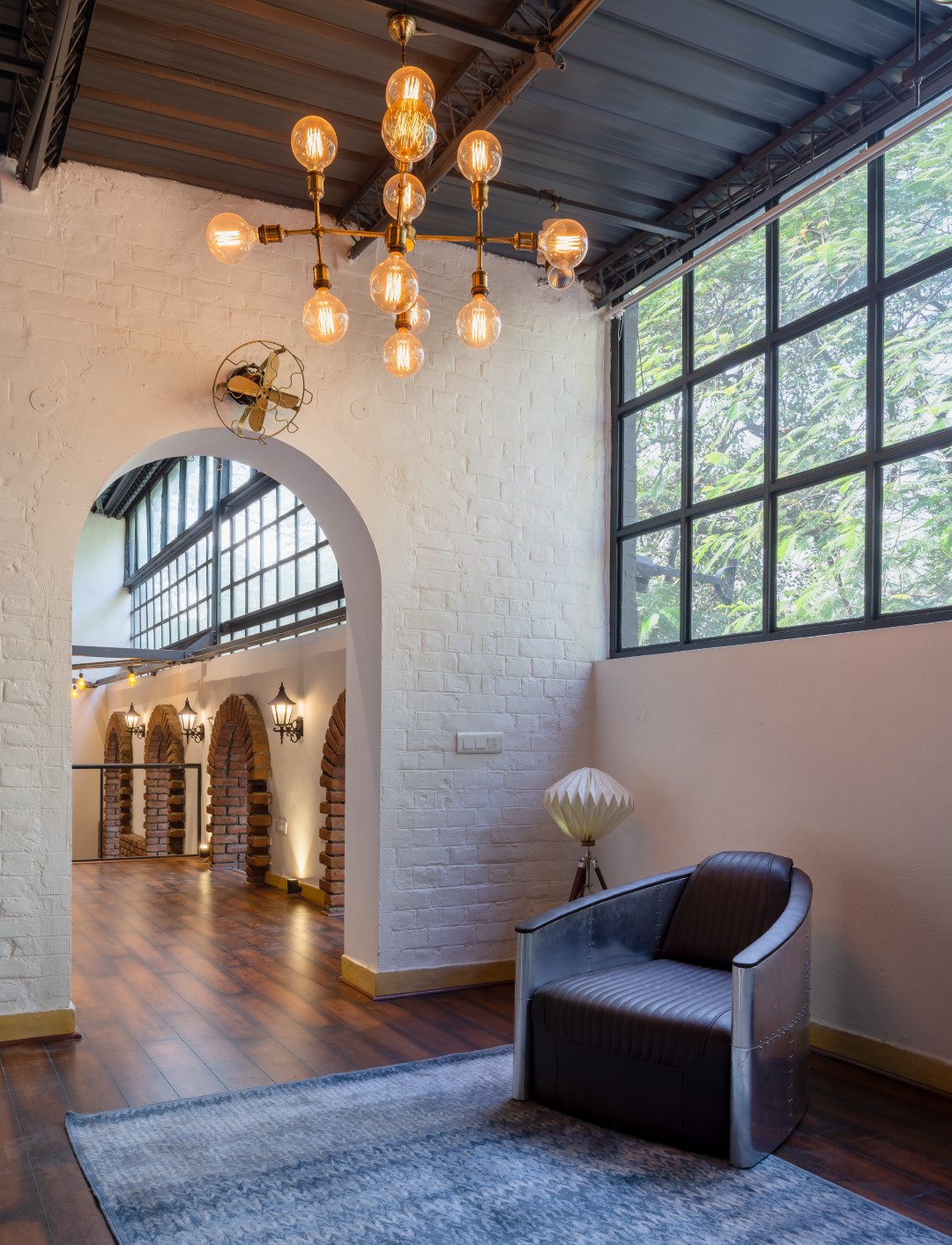 The conference room follows the same ‘One space’ principle.  Tucked away under one half of the mezzanine, its doors were made of mild steel angles and glass which could slide out thus making the space larger while providing acoustic privacy if need be. Emphasis was given on providing as much natural light as possible and tall 15-foot-high brick arched windows were made on one side of the workspace to allow for the same. 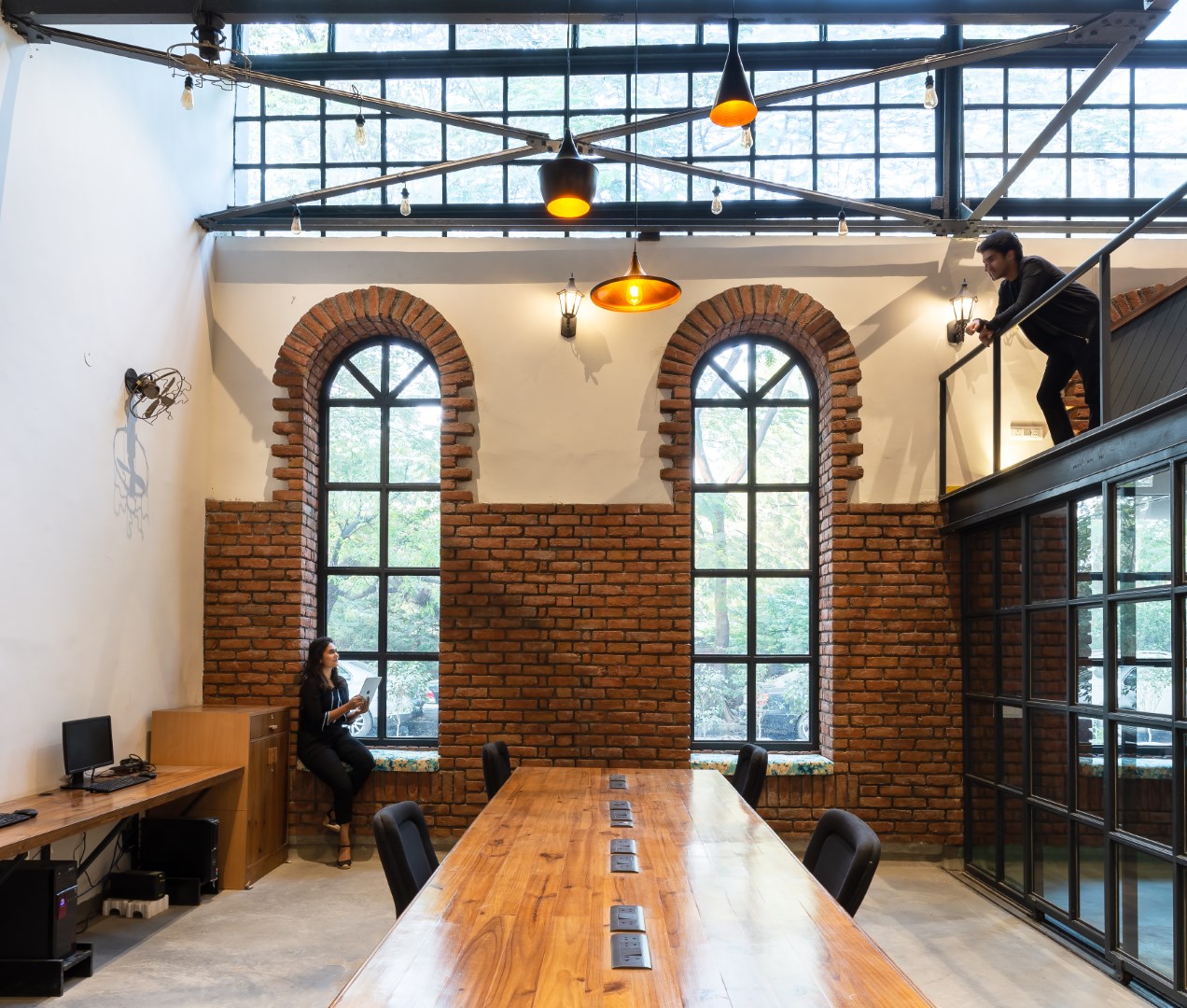 The mezzanine continued from one hall to the other via another arched opening thus overlooking the large multifunctional studio space, which would be used for screenings, product shoots or even as a secondary workspace. The mezzanine itself was used by the executives and thus were treated to the clerestory windows of the saw tooth roof, a part of which were made from scratch but followed the same design language as the existing ones. 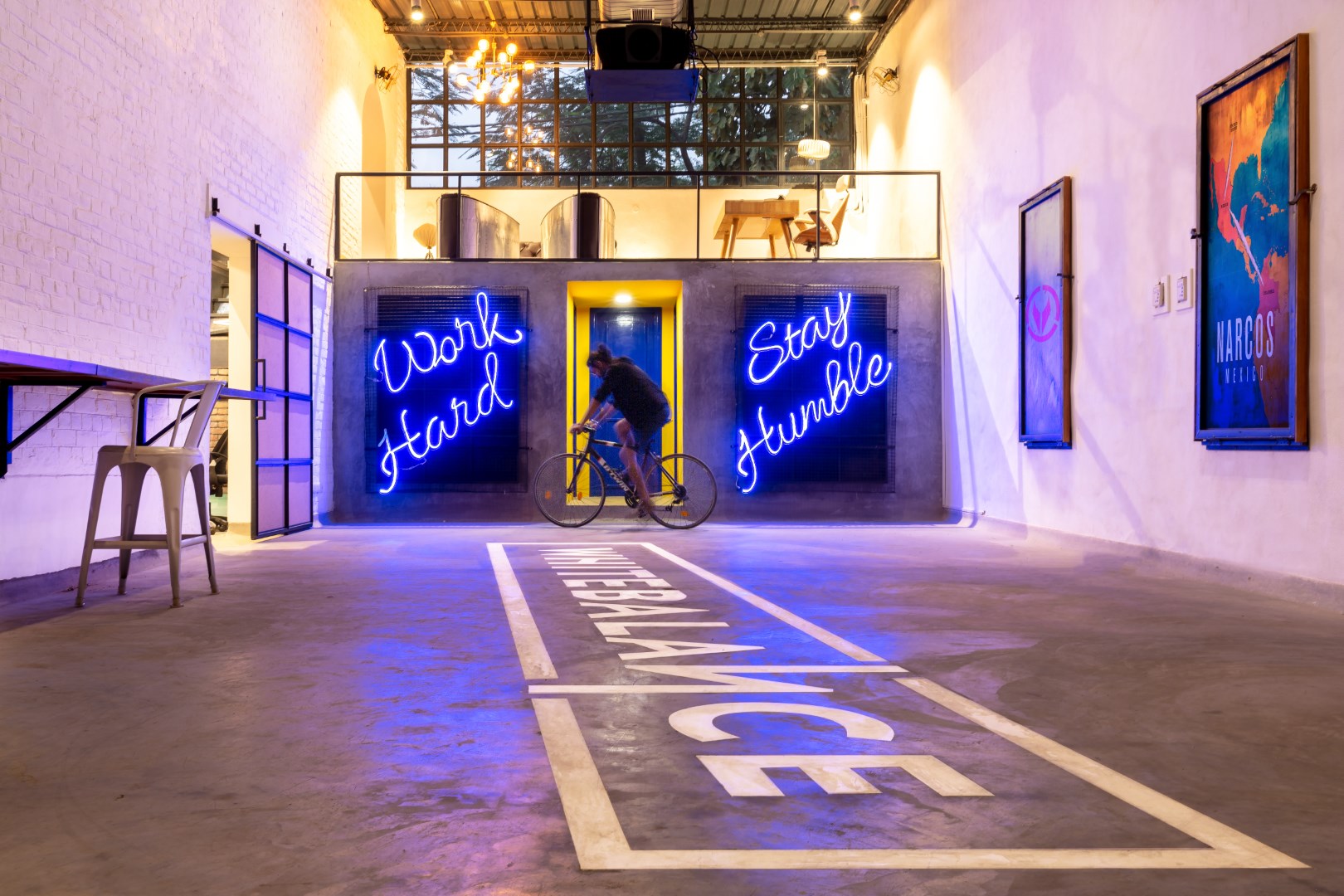 Bespoke pallet wood tables were fabricated to the highest detail to go with the industrial aesthetic and aluminum-back arm chairs were made to stand out in the executive mezzanine. 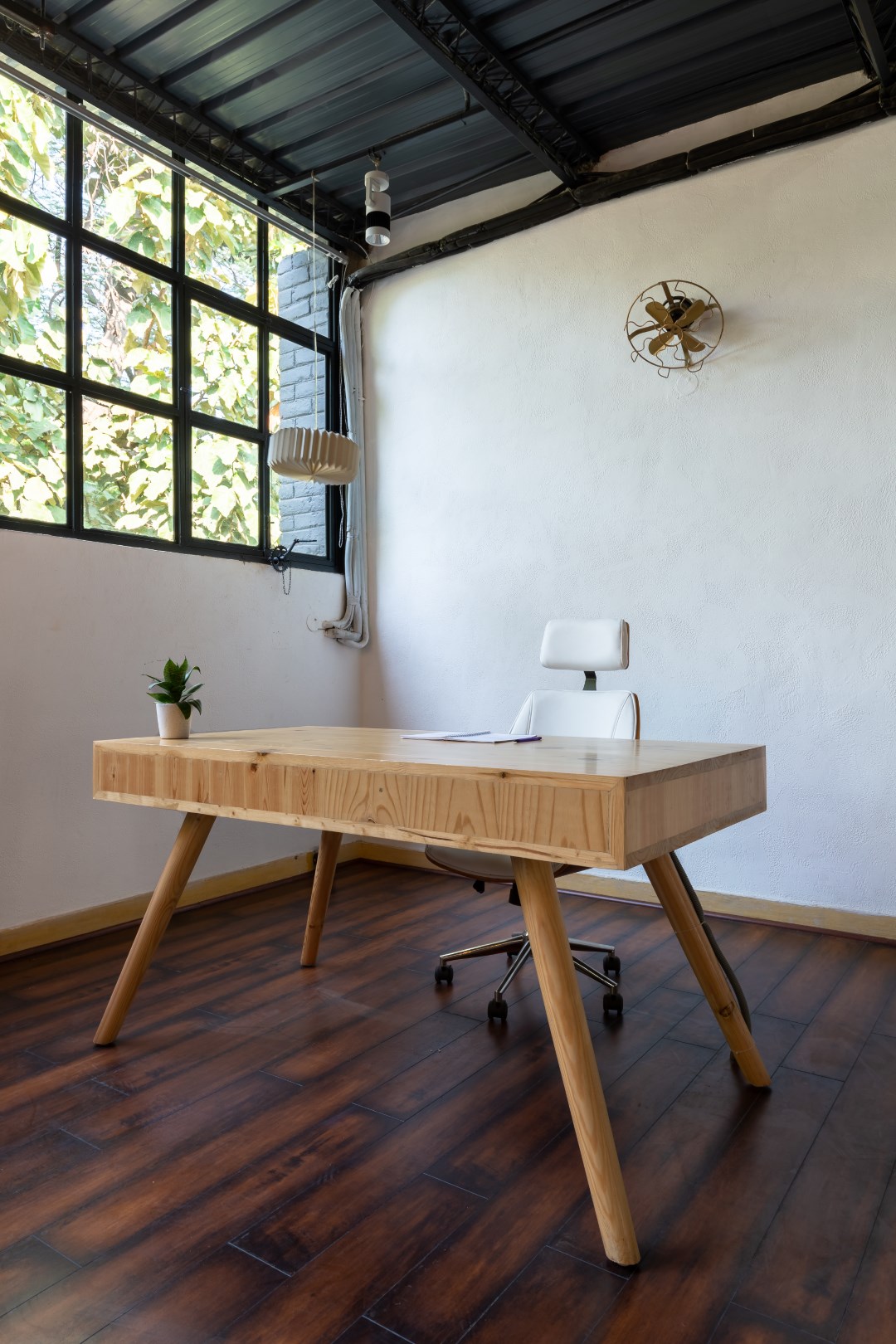 It was essential to create a space that was modern and yet had an industrial language which would appeal to the employees of ‘WhiteBalance’ while also serving as a landmark for the rest of the industrial area of New Delhi that true hidden gems reside under the tin sheds of numerous abandoned warehouses, waiting to be adapted into something fresh and off beat. 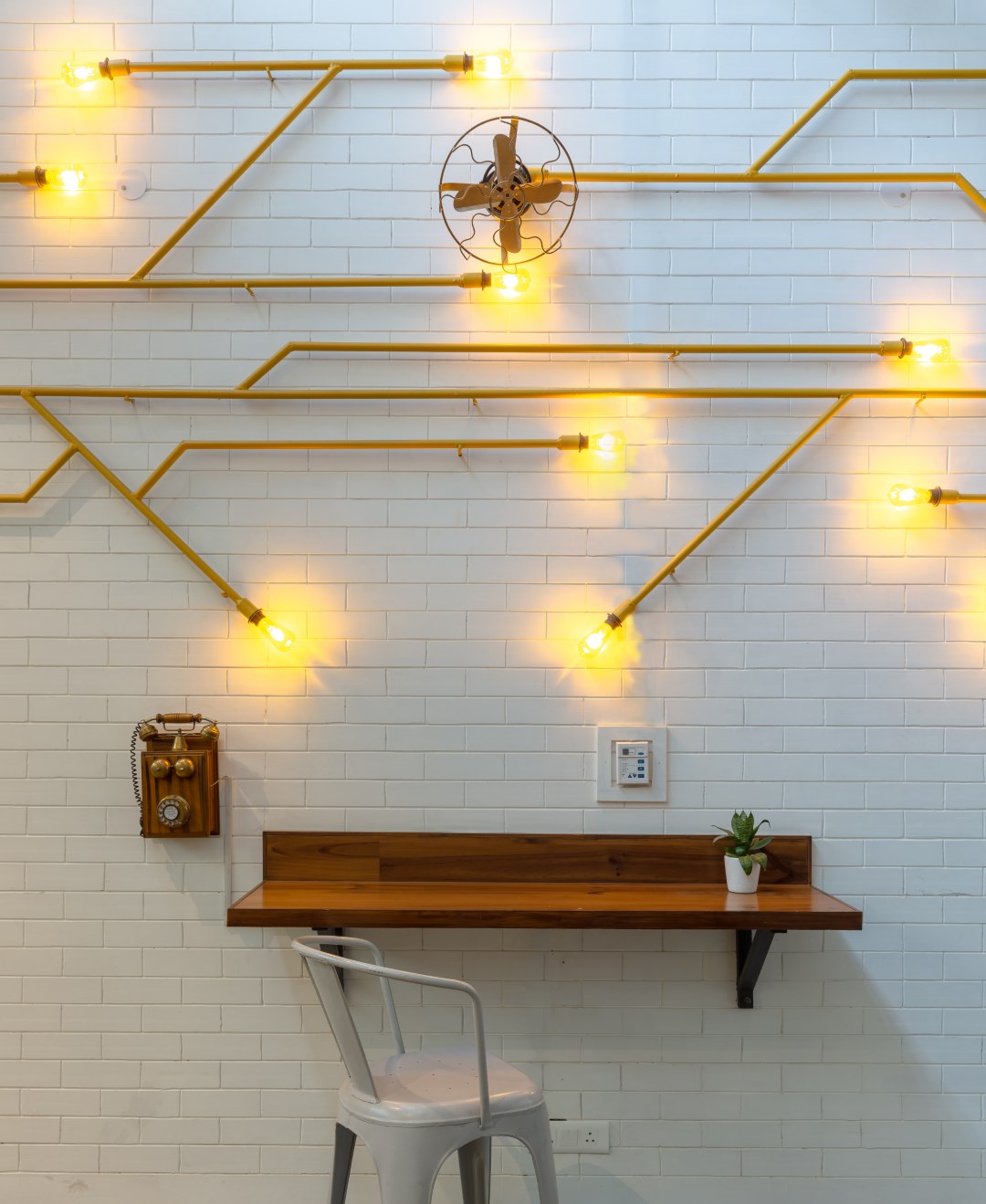 This was a project where the architect and clients collaborated throughout, navigating the long bureaucratic process together as well as the design and construction phases. As an architecture practice Studio Bipolar believes strongly in a collaborative approach and are always heartened when the results are as fruitful as this one has been. Robert Godinho, founder and director of ‘WhiteBalance’ had this to say regarding his experience and the final product- ‘This is where I feel most at home, enjoying intellectual, creative points of view and having a pulse on all the ongoing projects.  The energy and vibe of a creative hub is what defines the soul of the organization.  Being in this space, helps me to live in the NOW, yet giving me the vision of what next.’ 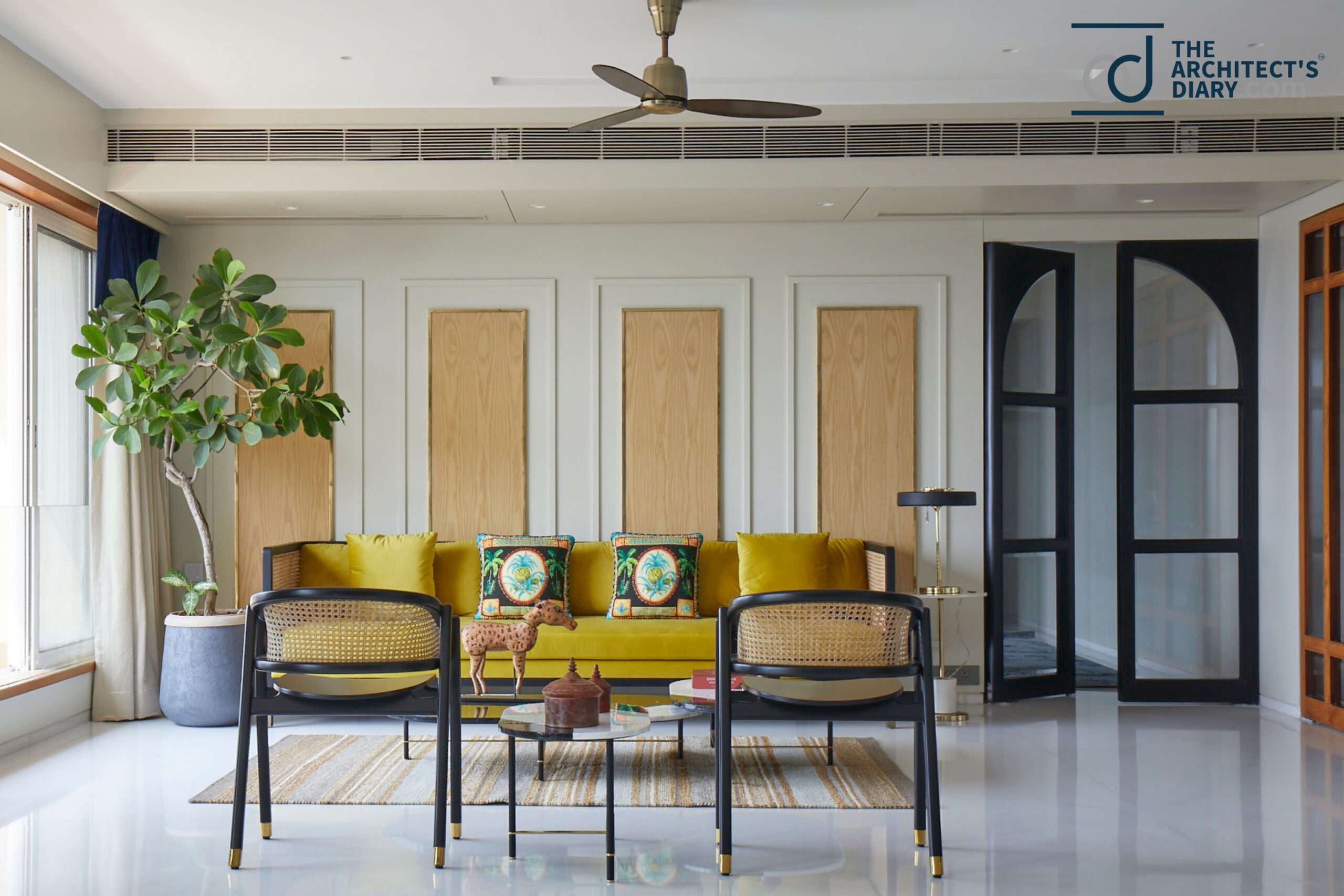 Spectrum of High End Italian Furniture to Artwork from Local Artists, this Apartment Design has it all covered | Chicago Studio 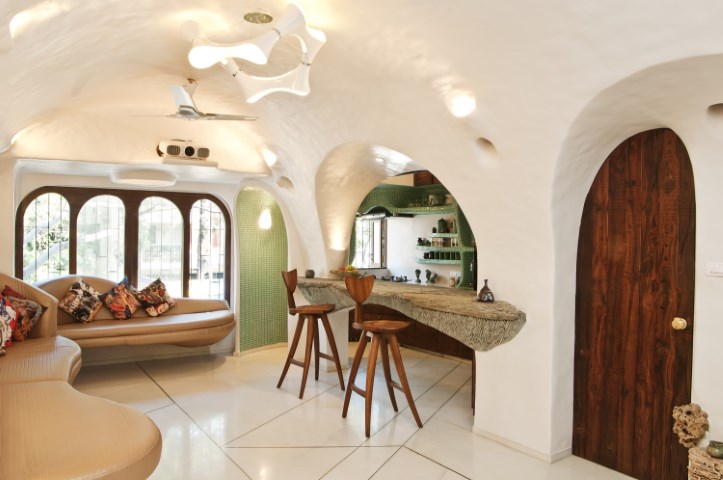 Organic style home in the suburbs of Mumbai | The White Room 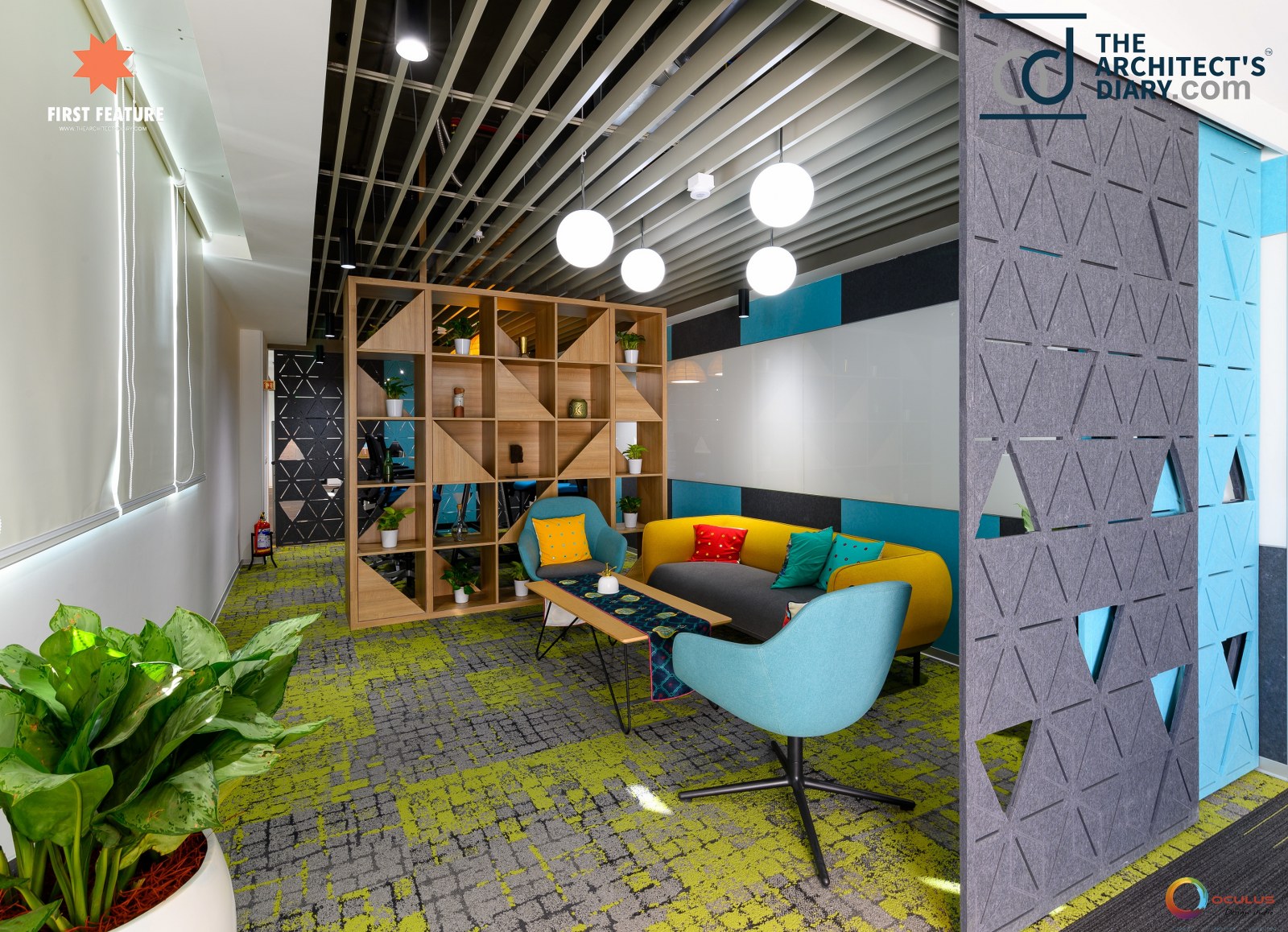 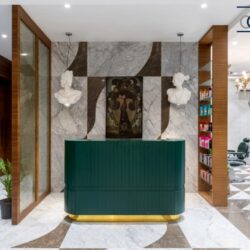 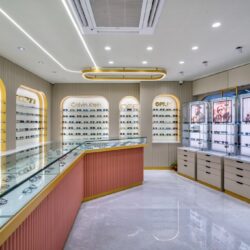 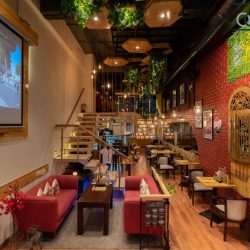 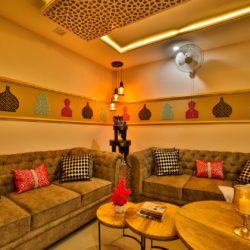 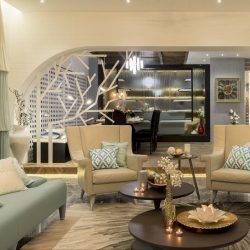