Envisioned by the dynamic duo Ankita & Pratyush for their own  Architectural Studio across a busy commercial street of South Delhi, on the top-most floor of a three-storeyed building this enticing studio exhibits not only a meticulous planning but also a pluralistic appeal. Sprawling across an area of about 650 sq. ft. Architectural Studio was conceptualized to create a story that actually builds up through various spatial expressions & experiences to finally climax once it meets the end. The underlying idea of a hierarchical organization was instinct with this stimulation of story where every zone one crosses leads to a more mature place, thus the design had to be exceptionally intriguing , flexible and rejuvenating but with responsibility. The entry opens to the first zone which presents as a multipurpose space with a compact reception area complemented with a library where the waiting area is embedded within the library. Further, a pantry divides this space into two zones followed by the Central Zone comprising of an elongated exhibition corridor leads to the Principal Cabin coupled with a washroom at the rear of the cabin. The entrance makes a strong visual impact with a bright yellow canvas demonstrate a lot of scribbling and sketches. As one moves ahead, one is greeted by a vertical element featuring backlit text illustrating the meaning of AVT. It’s been placed at a distance to ensure that the logo catches the eye as a point of focal attraction, and also clearly elucidating the pre – dedicated circulation pathways. A lot of vertical lines have been used to balance the heights thus compensating the drop down ceiling. 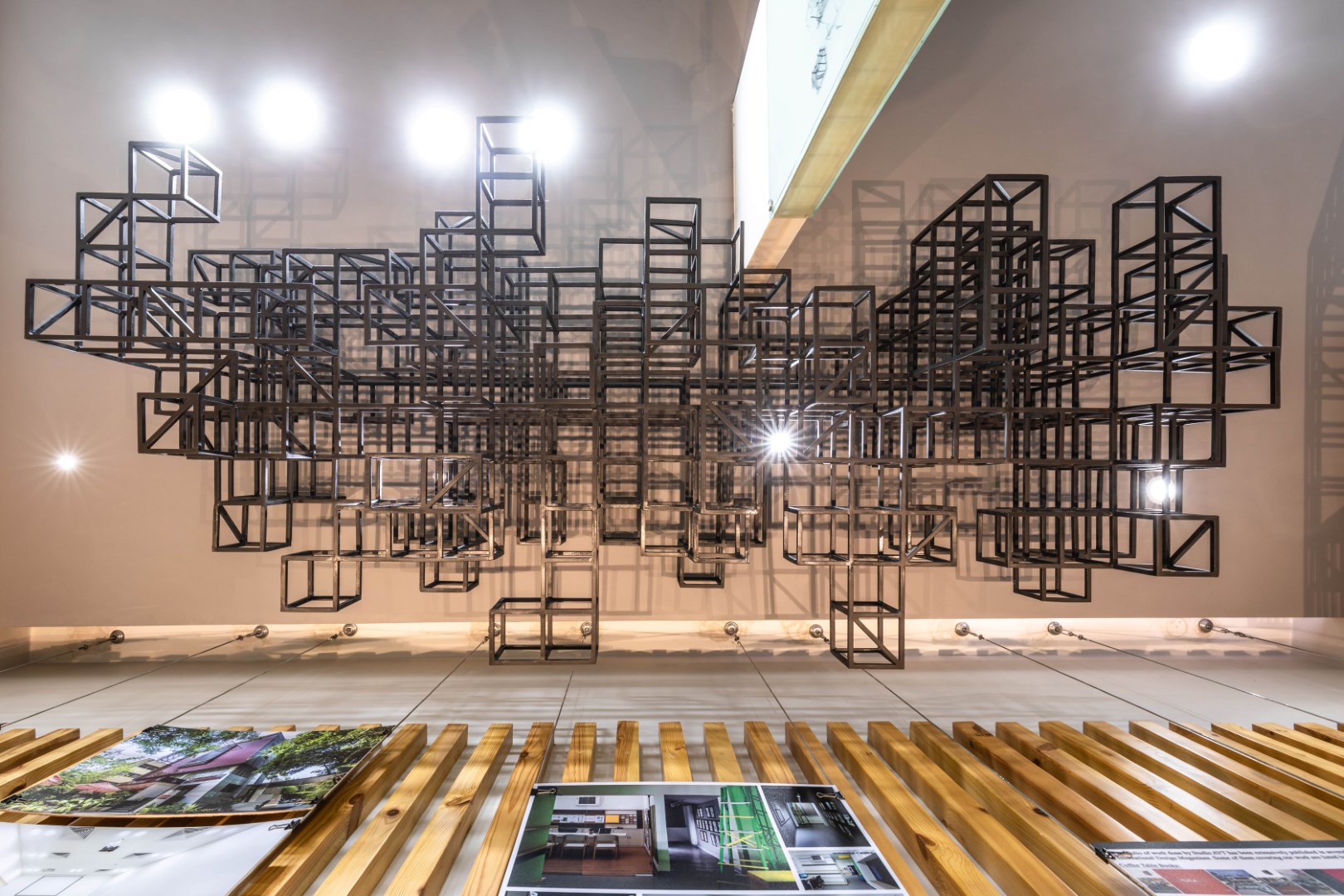 The first zone is segregated into two parts – the left side featuring four junior workstations while the right side displaying a library with all reference materials such as books, magazines and case studies coupled with a Junior Zone which features these scribbles and abstract sketches to make this Studio less corporate and more informally interactive. To exhibit evolution, the Central Zone showcases presentation panels displaying completed projects in the Exhibition Lobby- a pre-dedicated pathway which connects all the three zones and augment visual interaction. The Principal’s Cabin, exhibition corridor and a washroom form the final third zone; signifying the highest level in the hierarchy of spaces. Comprising of the senior workstations, the central zone evolves as the brainstorming hub where all AVTians come and contemplate about innovative design solutions. 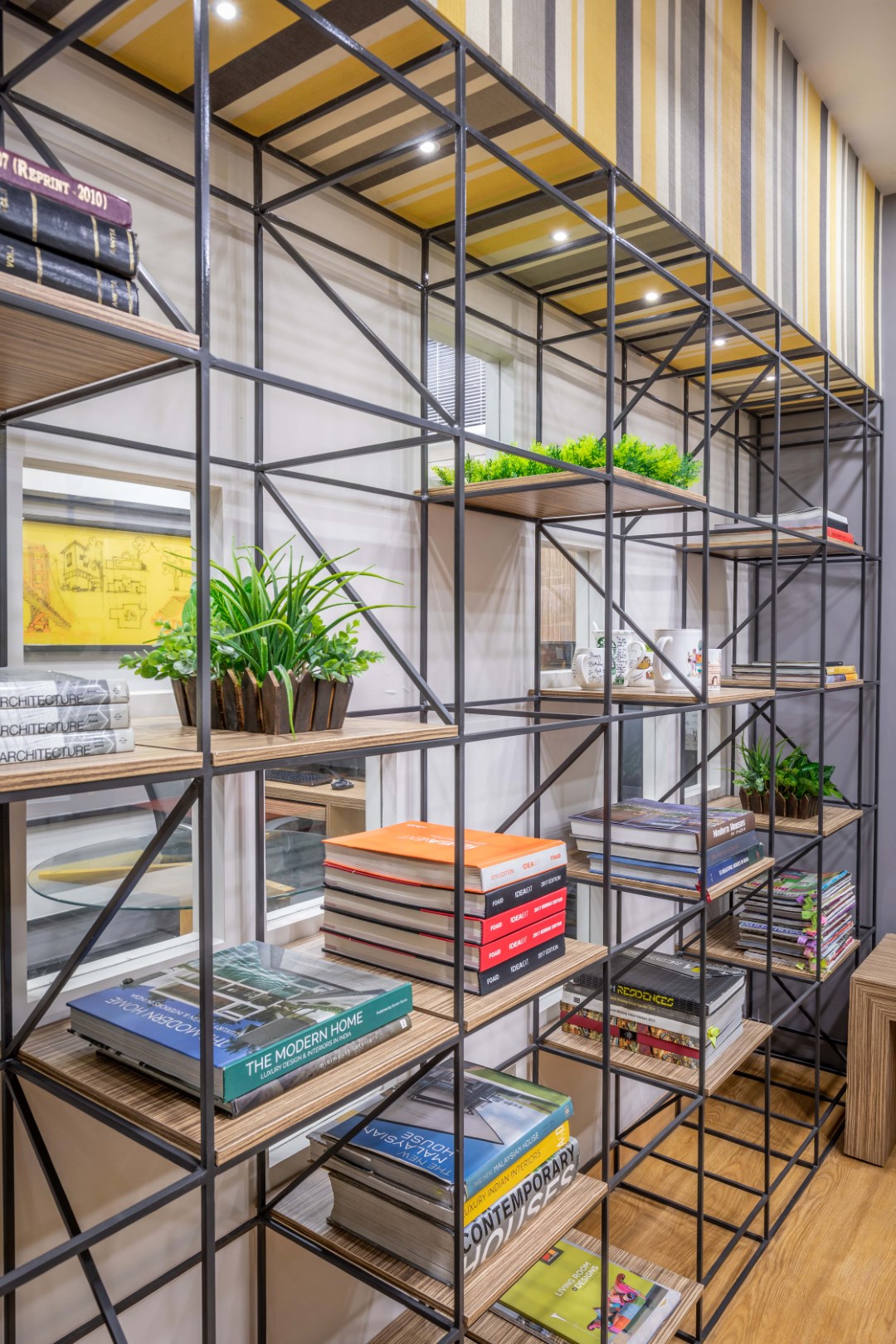 Conceptualizing this notion, a visual expression was derived into physical existence manifesting how an idea can be random & evolving at the same time. An artefact was crafted out of MS bars, as an expression of idea suspended from the ceiling which becomes an aesthetic focal attraction of the Central Zone. MS bars have also been used at several other spaces for creating various functional and aesthetic purposes. In fact, MS dominates the material palette in the Principal Cabin, such as storage where shelves are detachable in nature and can be easily picked and placed at different levels creating different patterns. Direction being a parameter of paramount importance in a designer’s world has been portrayed as a design expression in the Cabin. An artistic North sign was crafted from MS bars and then suspended from the ceiling of Principal Cabin. 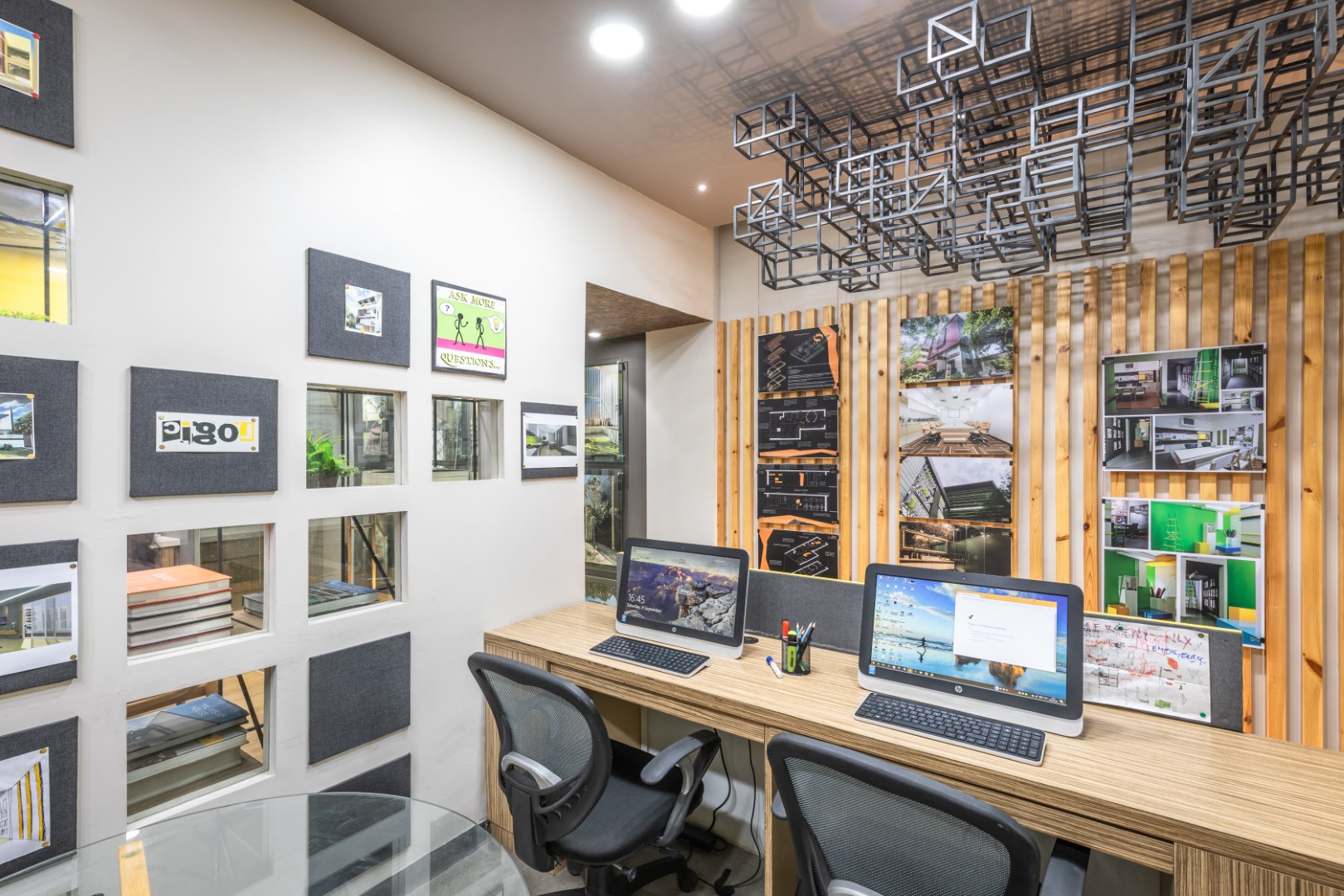 The common wall for Principal Cabin and the Central Zone bears punctures reflecting transparency through the glass, thus allowing a sense of connectivity between the zones. The display unit in the Exhibition Lobby also connects to the main cabin where one can access the space during discussions. Due to a shortage of space, the Exhibition Lobby serves as a conference space as well where the architects can display the work and explain similar kind of projects. A green wall at the end of the Exhibition Lobby enhances the sense of this space, reflecting a hint of serene nature. 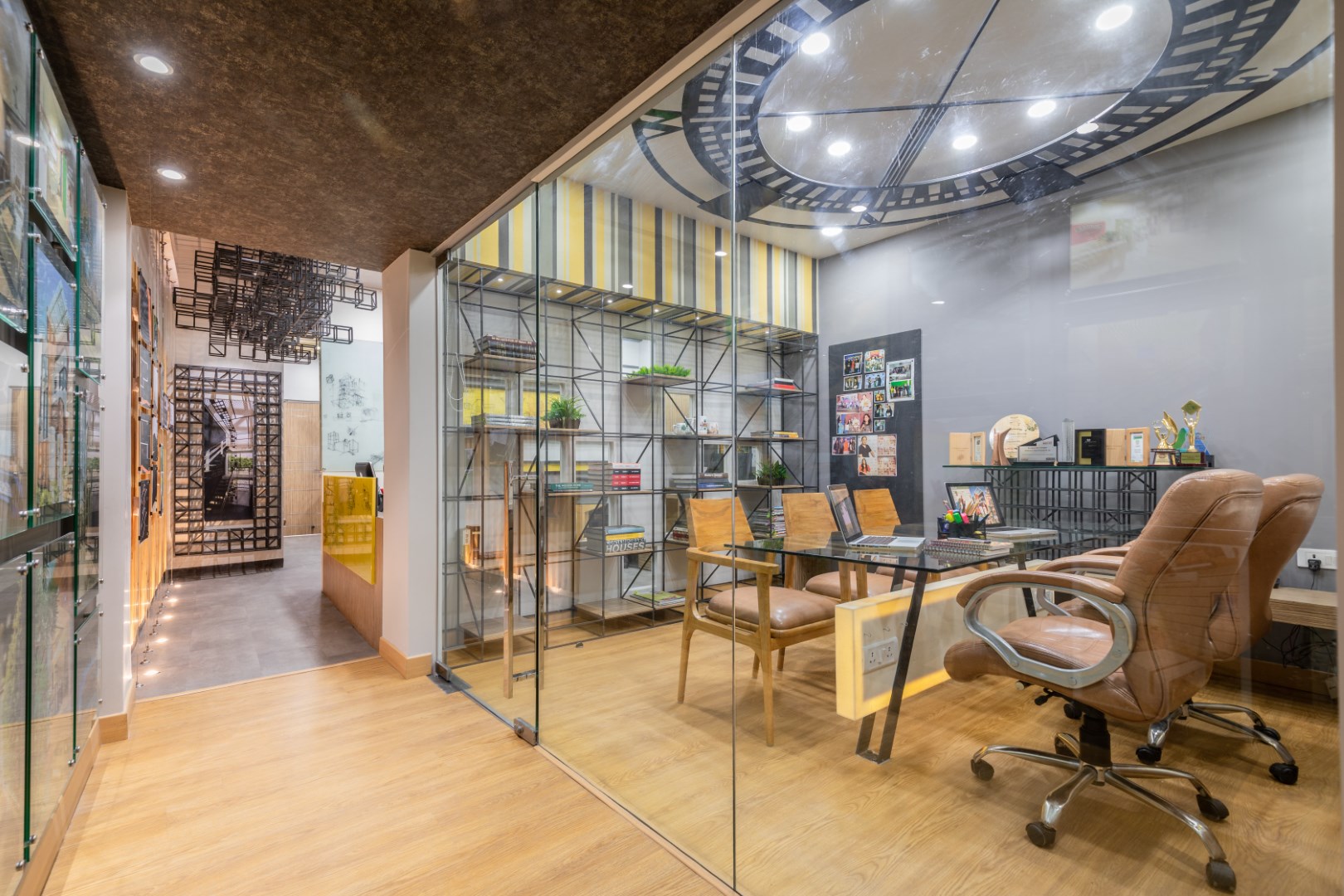 Lying at the rear end of this studio, the washroom in itself is a modern space but has a maximum amount of energy and flamboyance in there. So in a day to day routine, when sometimes you get fed up, fight with the partner or a client – this is the one place you get alone for a minute, rejuvenate yourself again and come back headstrong into the world of design.

This is how Studio AVT 2.0 was exhilarated by Ankita, Pratyush and their team of AVTians as a testimony to their creative and artistic versatility, as a subtle attempt to reinforce the idealogy of the Studio. 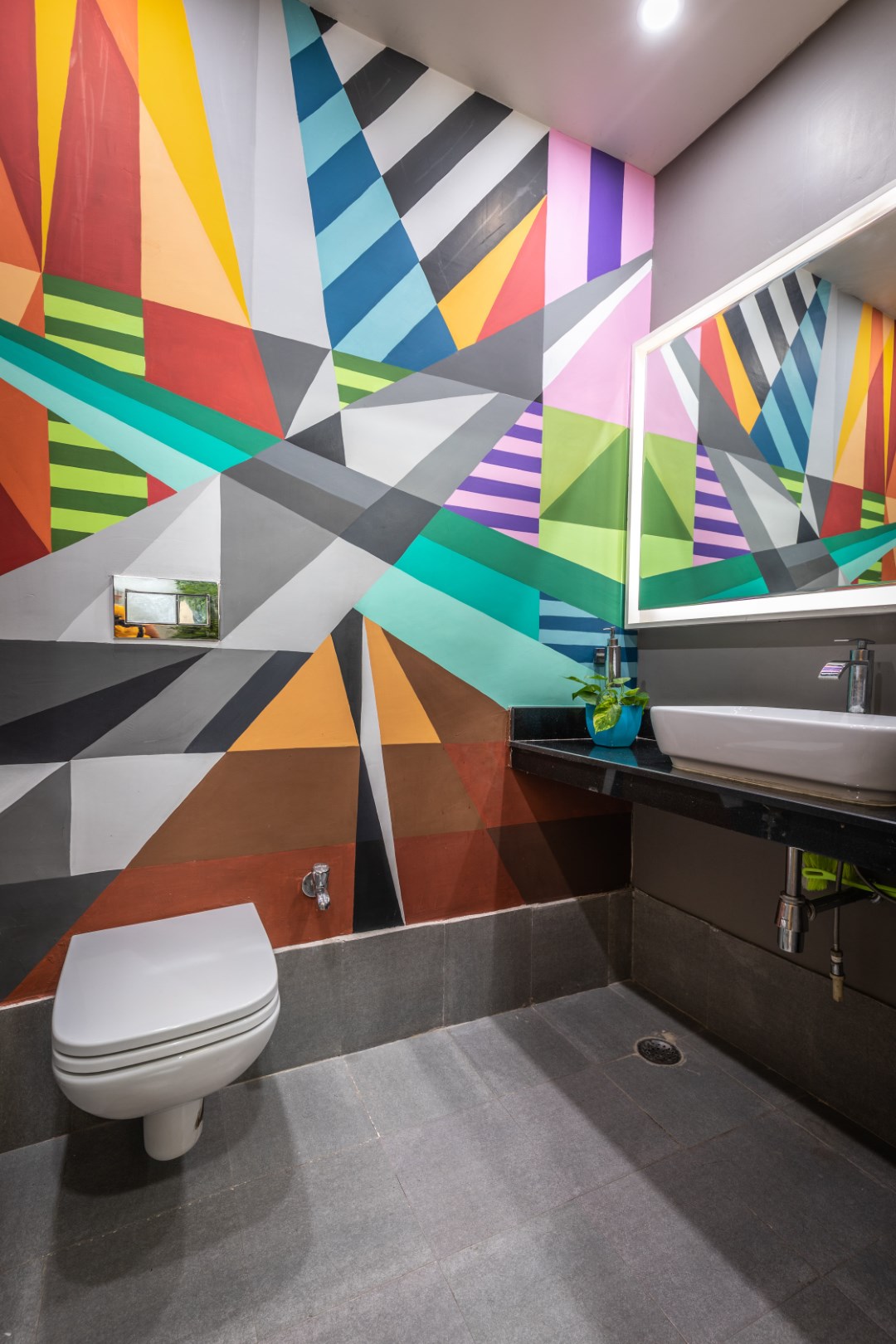 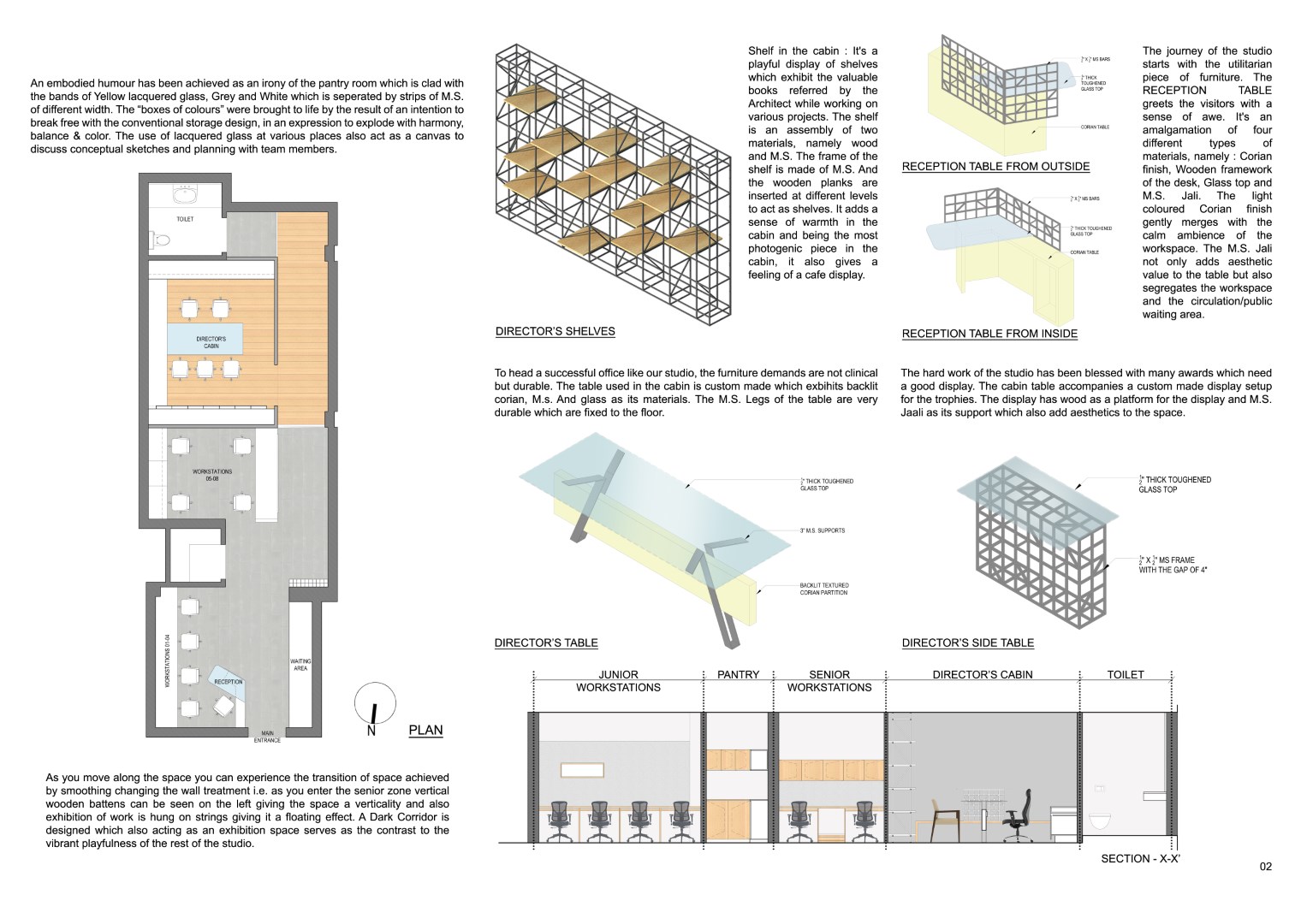 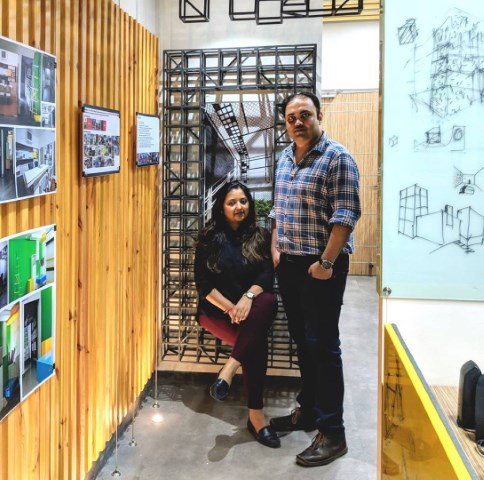 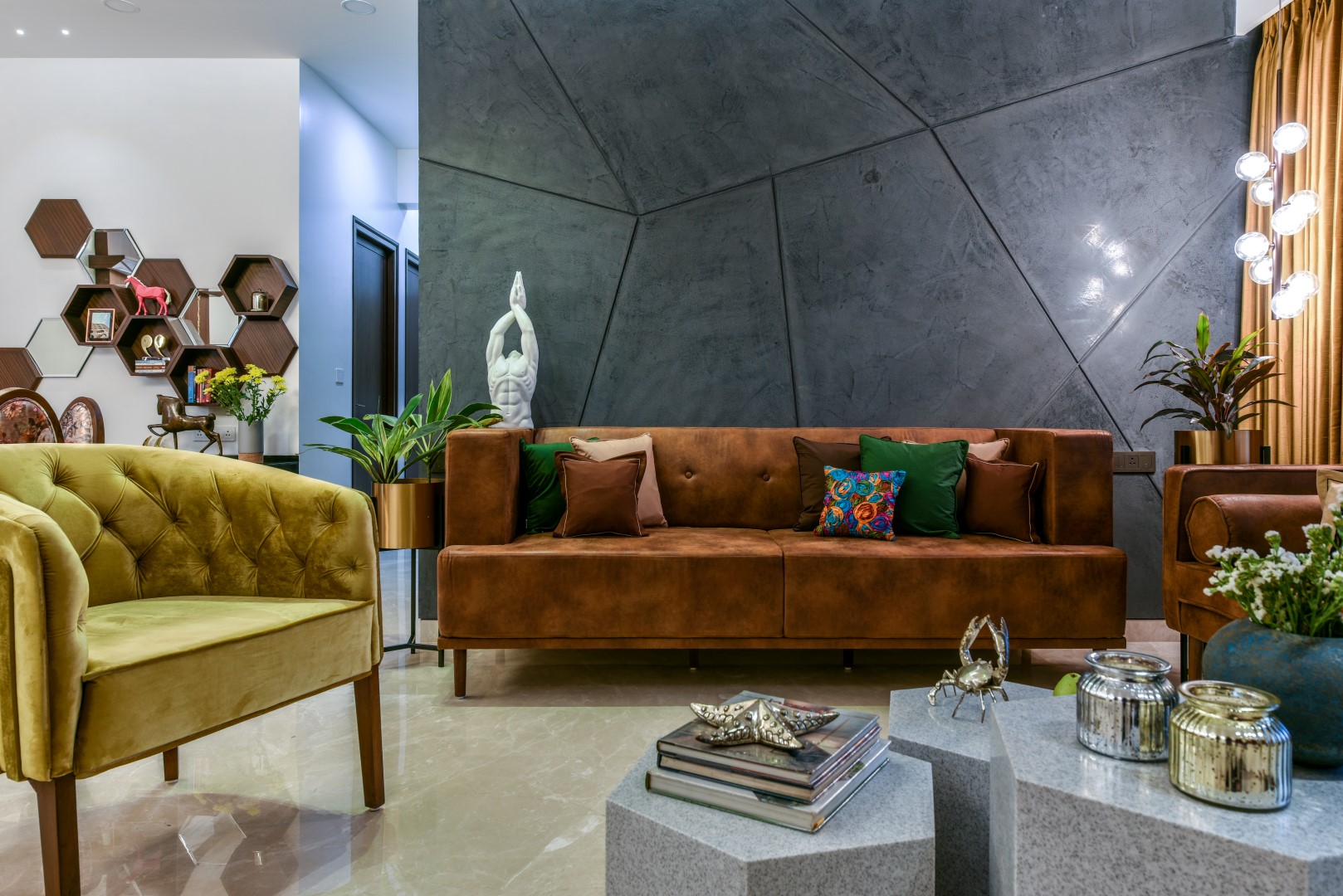 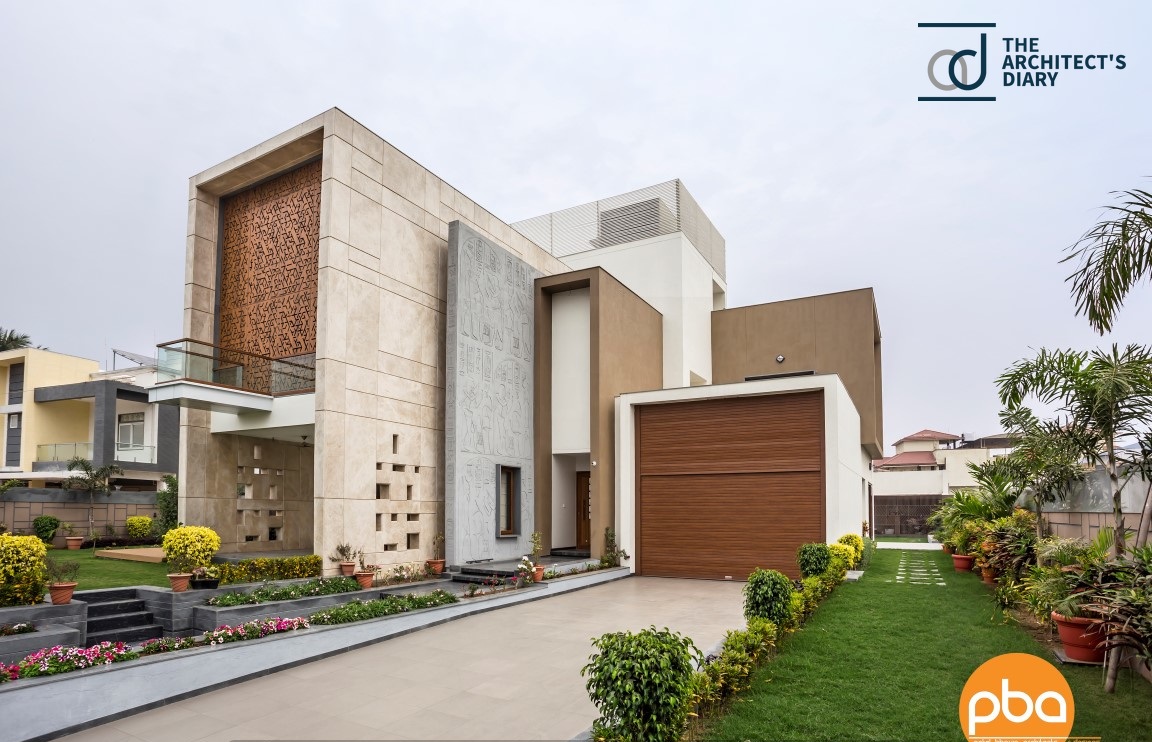 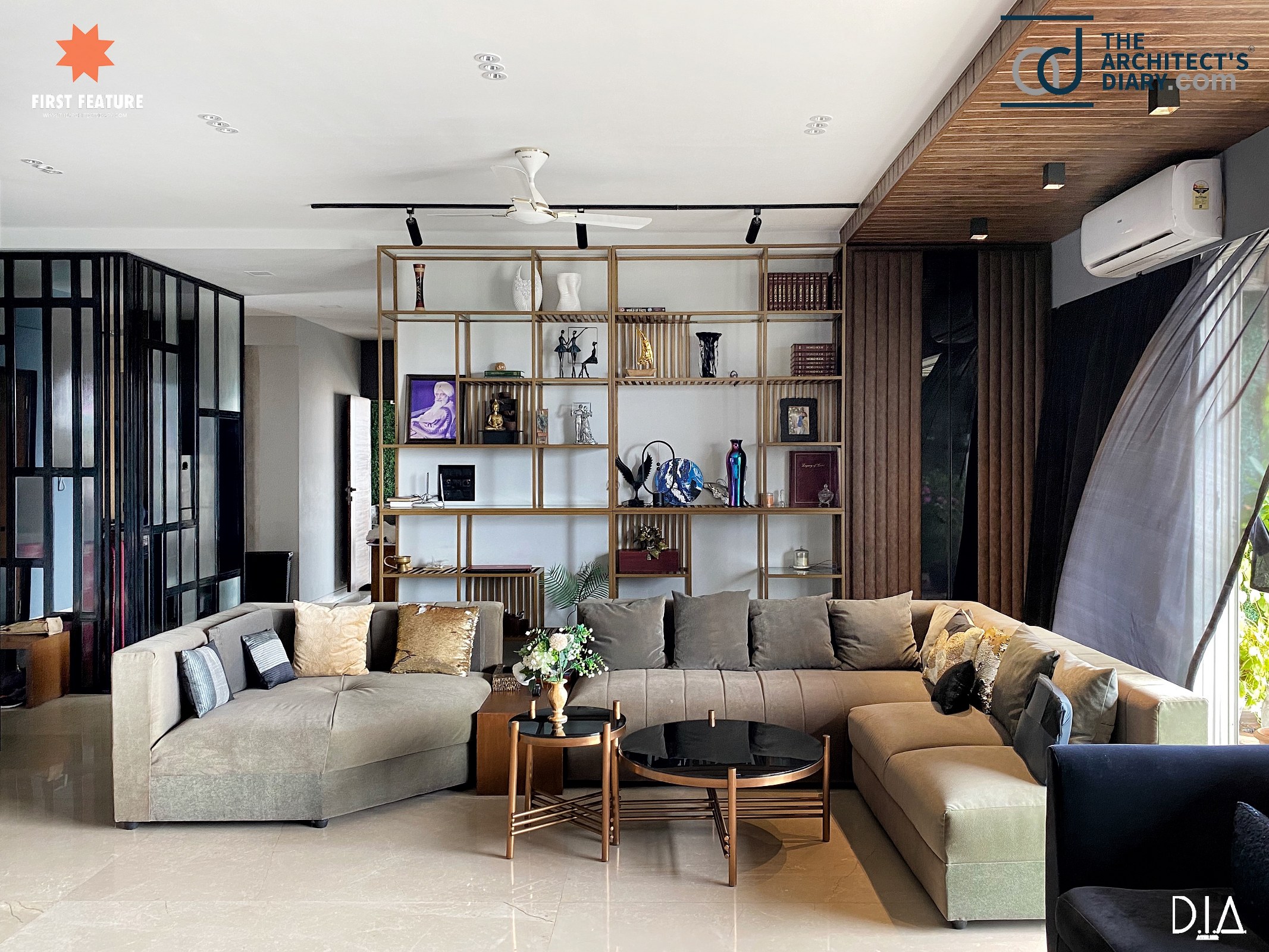 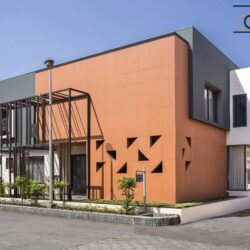 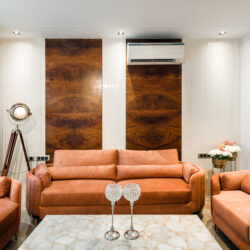 A Play on Warm and Cold Tones, as Well as The Use of Natural and Man-Made Materials, is Central to The Design in this Residence | Arch Studio 18 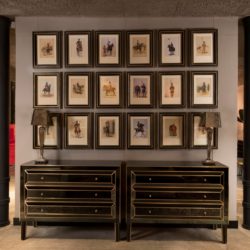 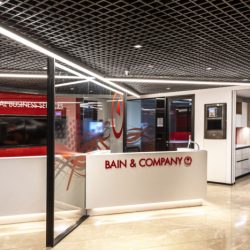 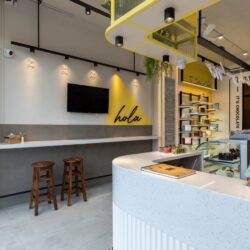