People will throng the martyrs’ pyres

Epitomising those, who perish for the nation.

The site of ShahidChowkis located on a very prominent cross road junction in the educational hub of Gujarat – VallabhVidyanagar. The road East of the site leads to Vadtal&Lambhveltown. Both of these towns are famed religious places and fairly populated bringing in ample traffic of devotees and working class to travel this route on their way in and out of VallabhVidyanagar. The junction has Sardar Patel University and ShastriMaidansituated towards its West. ShastriMaidan is a gigantic public activity ground located in the centre of the town with all leading Institutes in its periphery. Shahidchawk is a gateway for approximately 70K students, teachers and clerical staff of these institutes. North of the location lies Dr H M Patel’s residence. He is famously recognised as the creator of VitthalUdyognagar – the Industrial town adjoining VallabhVidyanagar. South wing of the junction leads us to the route with further more prominent landmarks. This route displays the cenotaph of ShriBhaikaka, the creator of VallabhVidyanagar and a statue of SardarVallabhai Patel who was a visionary behind the educational hub of VallabhVidyanagar. At the end of the same road is the statue of ShriVitthalbhai Patel symbolising as a gateway to VitthalUdyognagar.ShriVitthalbhai Patel was a very learned freedom fighter.

We aimed at designing a public space where people can see the glimpses of the Pre-Independence patriotic culture of India and take inspiration from such gems the society had amongst us. Our purpose is to build a sense of community, civic identity and culture through this project concurrently enhancing the architectural diversity of the region.

We set with a purpose to create an interactive public space at one of the busiest crossroads of the town.We aspired to set up features of well designed urban public space in a traffic island. We aimed that an onlooker should be able to participate with the surrounding in all aspects – evaluation of the space and enjoying the evaluation process simultaneously. Thus the self-enhancement process begins from an individual and multiplies to the larger segment of society. We took up the challenge of accommodating these experiences with the built form in a given urban fabric. 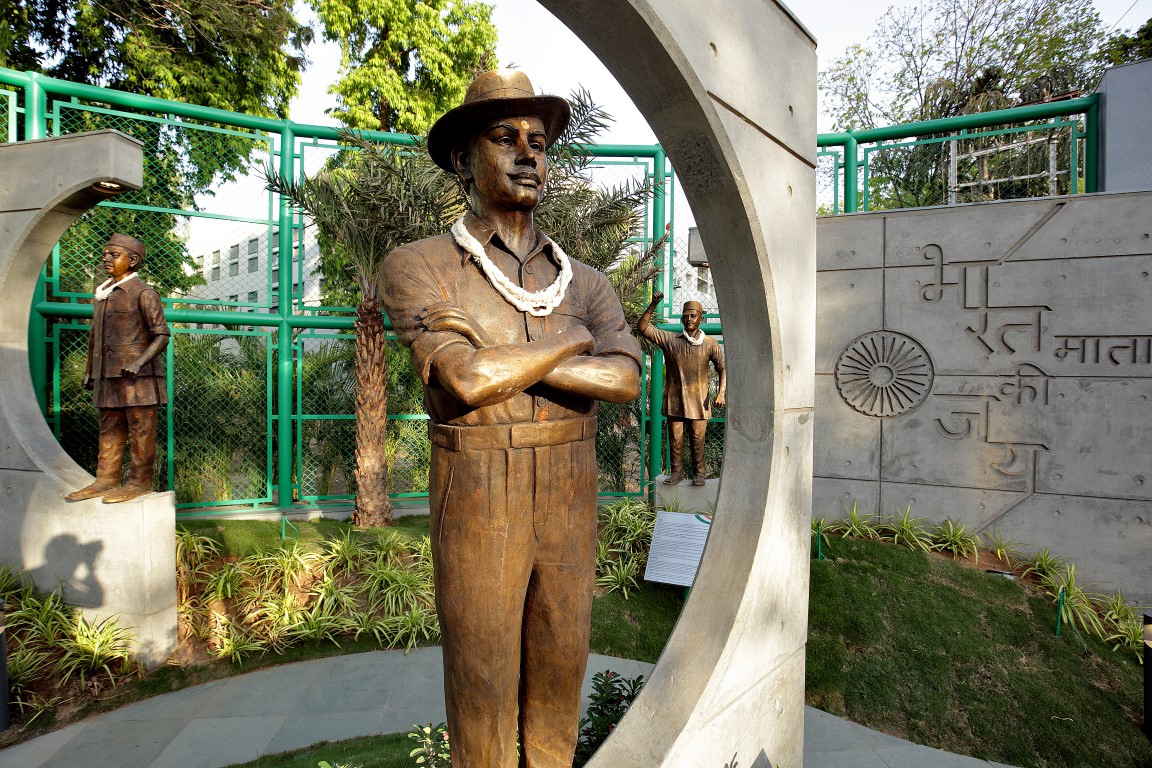 Movement design ties the architectural elements and humans to achieve harmony. Vehicular traffic movement is the focal movement in a given setting. It is improved by redesigning and relocating the central island and lane dividers approaching the junction including regulating parking pattern through architectural planning and designing with a projection of future traffic hazards and challenges.The junction is well lit by specially designed low maintenance luminaries to justify each space and its function.Road signage with the relevant information is designed and well located on the junction for public viewing and information. 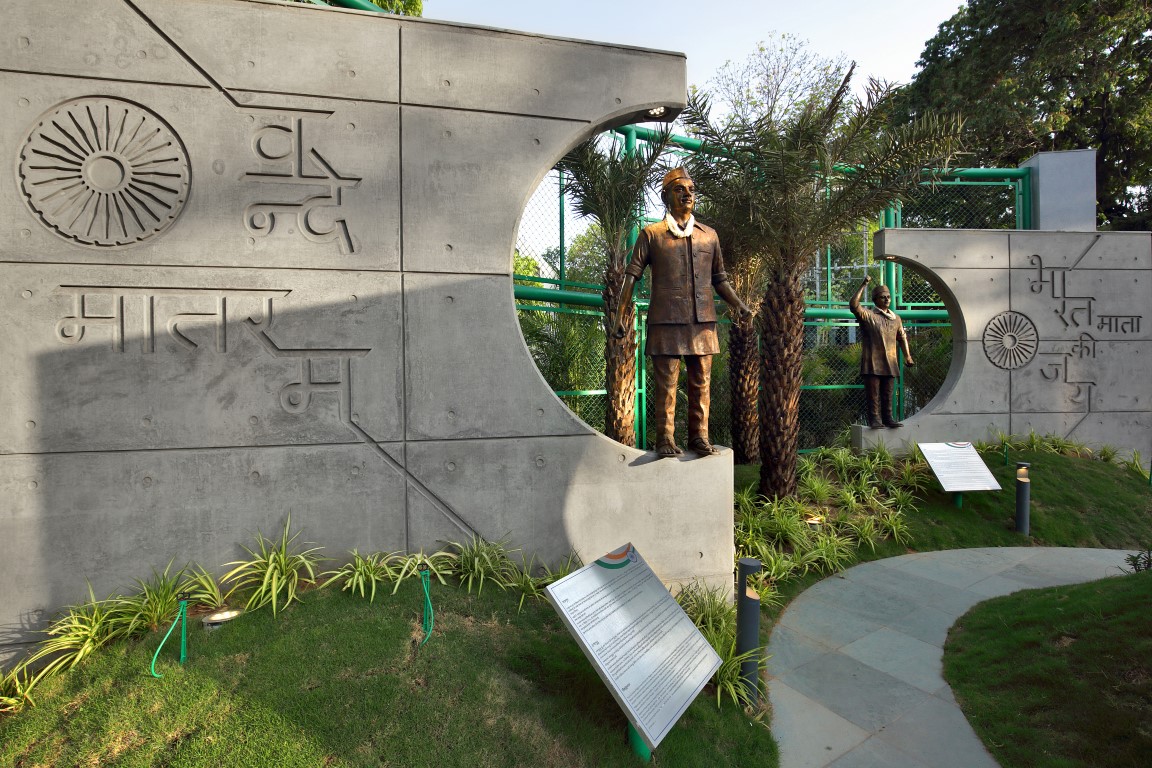 Establishing visual connections are necessary for orientation and therefore for creating a coherent picture of an urban setting.In order to achieve it, life-size statues of Bhagat Singh, Sukhdev&Rajguru are installed at the South-West corner of the junction, in the closest vicinity of The Vice Chancellor’s Bungalow. The statues are located within the physics department of the University. The placement is arranged in a very dramatic orientation to enable the onlooker to enjoy glimpses of all 3 figures while approaching from either of the four roads. The National emblem is placed in the central island with four lions facing each approaching road. The reduction of the roundabout circle size has enabled a smooth vehicular flow and made it convenient for larger vehicles to turn. The Lions on the emblem symbolise the sense of security, protection, care and trust giving the travellers a comfort and reminder the town of VallabhVidyanagar offers them. 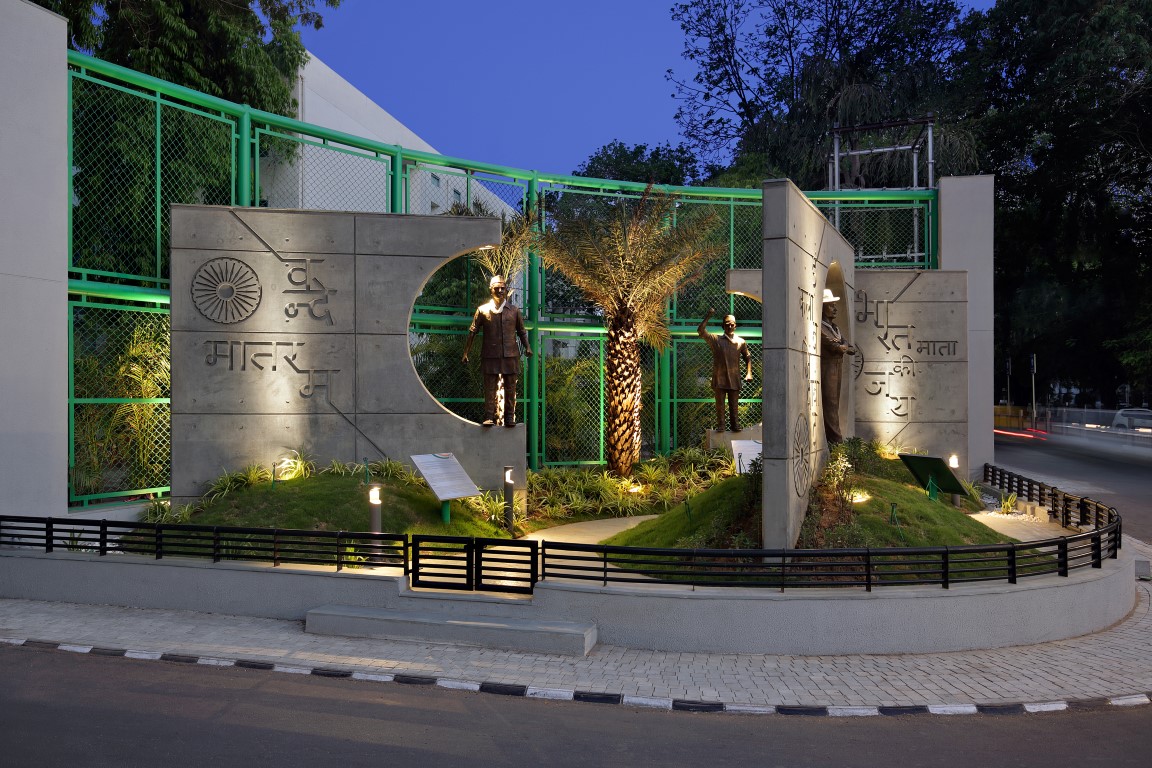 Graphical representation of revolutionary slogans of freedom fighters in our national language connects the people from a distance to it through its bold arrangement. It gives an expression of nationalism to the entire set up.

The material application plays a significant role in offering a true sense to the built form and hence making the visual connections even stronger. Materials like stone, exposed concrete and metal depicts immortal appearance while complementing the design concept due to its unique properties of strength, durability and toughness. The landscaping has been planned in a way to enhance and complement the installation and the deeds of the martyr. The three brave freedom fighters were martyred for their love for Bharat Mata (Mother Land) and today we remember them standing tall on the soil of a free independent India for whom they sacrificed their lives.The bronze casted life size statues are treated with Patina surface finish. The statue looks a different shade from each viewing angle and that is the beauty of a Patina surface. 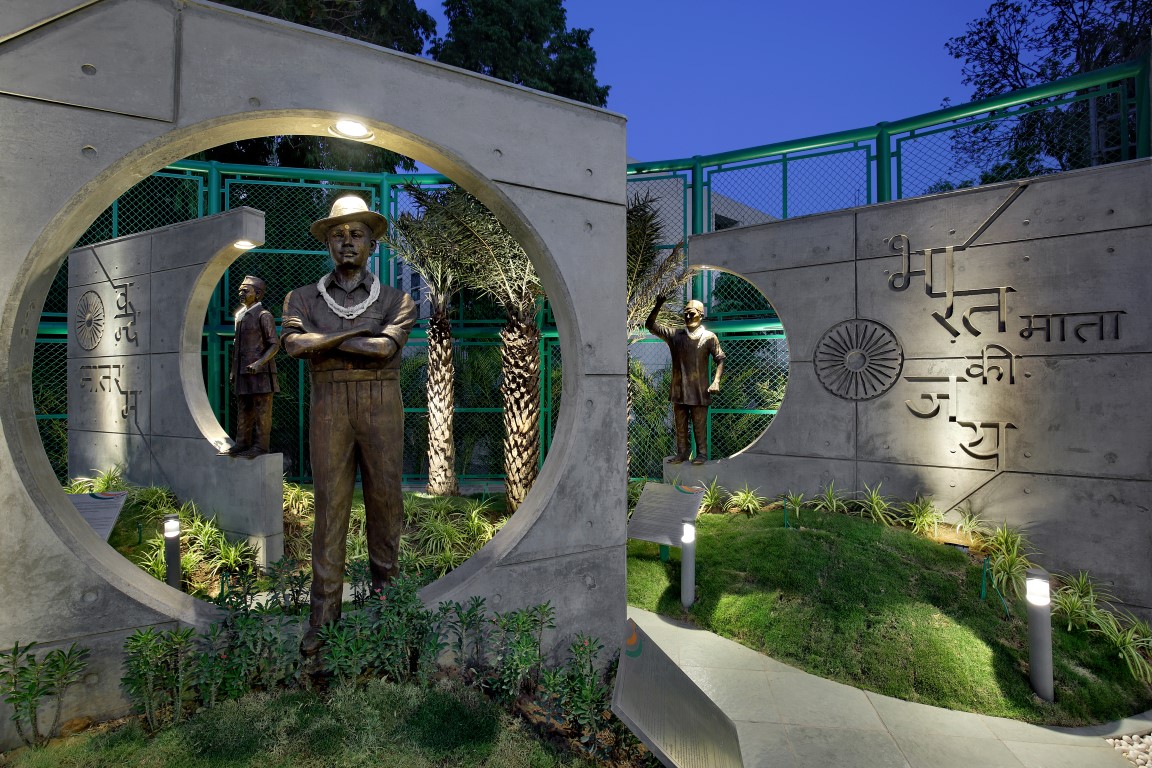 Establishing physical connection requires a well-defined activity. A live architectural site needs the reinforcement of human activities which keeps them connected in an urban web.  With well-defined entry and exit, the circulation path for people is provided through contoured landscaping among three statues. Information plates are placed along the pathway which describes inspiring life stories of these martyrs in national, regional language and English languages. In such a compact area a person can get detached from the busy surrounding, be able to touch and feel the set-up, go through the facts on information plates and possibly get to appreciate and be inspired by the sacrifice of the three men. 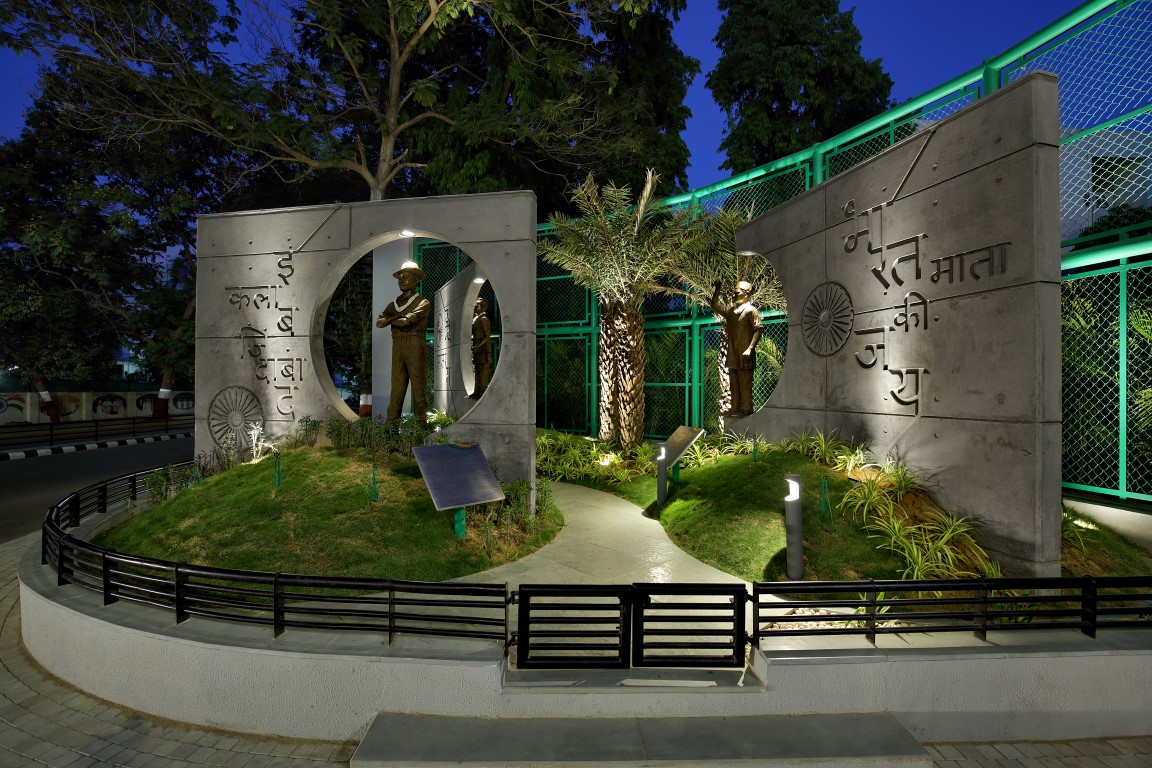 Transformation of waste or unutilized spaces into adaptive public use and adjoining physics department campus brought a value to this project. The vertical landscaping in the backdrop of this monument will be useful to physics department as their open stage backdrop. The unutilized area has now become useful for conducting outdoor functions. The wall of the Vice Chancellor’s residence building on the south-east has now been beautifully uplifted with art expressions that create public awareness. Paintings on the wall represent a timeline of Bhagat Singh’s life and a walk through are created along the walls. Dust covered leftover patch of land on both sides of the roads are uplifted to pedestrian paths and organised parking areas with paver blocks and railings.

On the whole, we attempted to exude a subtle sense of Patriotism, Sacrifice and Courage for the young generation who is the future of our nation.The cross road junction is thus aptly renamed as “SHAHID CHAWK”. 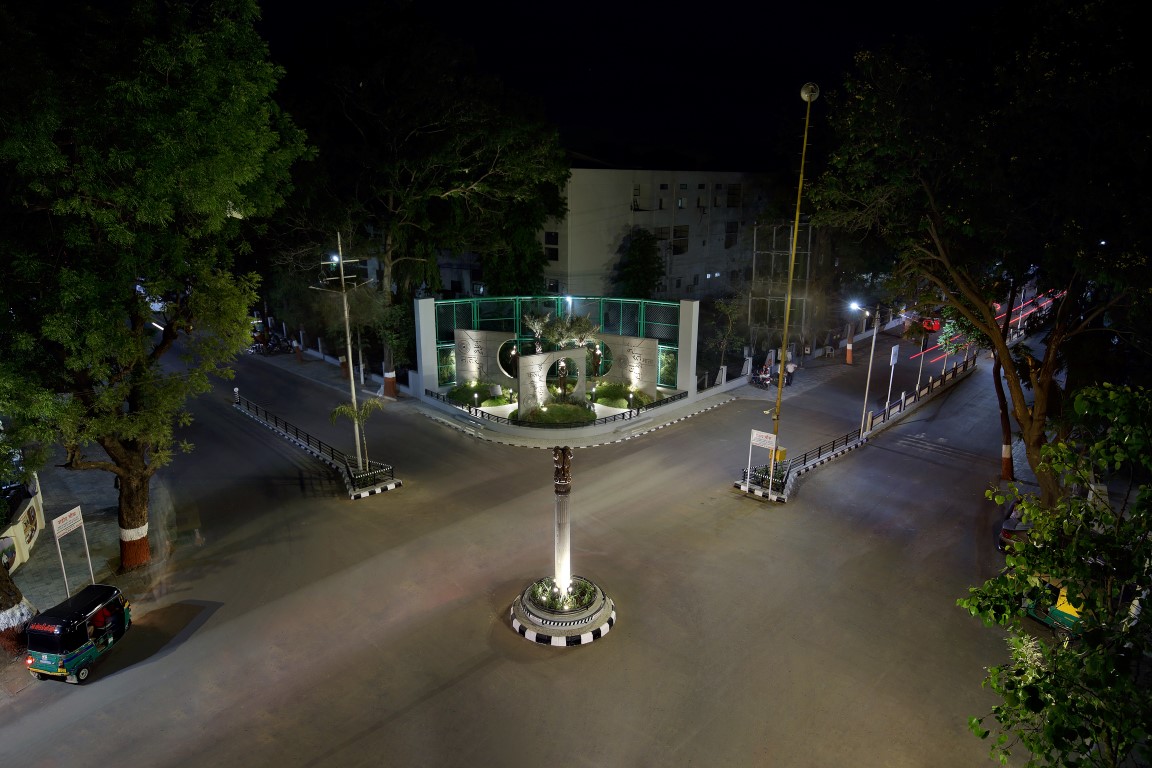 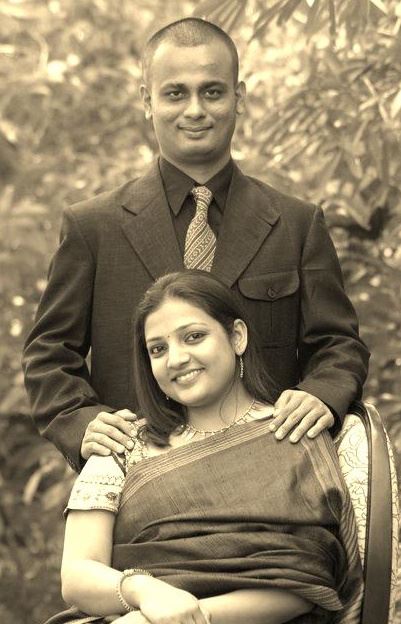 Yash Patel completed his B.Arch and his expertise is delivering contextual, climate and client friendly designs with systematic execution.

Rachita Patel has done her B.arch following which she did her Post Graduation in Industrial design  (Ceramic and Glass Design) from the prestigious National Institute of Design.

Their creative global firm, Ergo d novate is based in Gujarat and follow the mantra of providing user-friendly innovative design solutions mainly concentrating in environmental and industrial design. 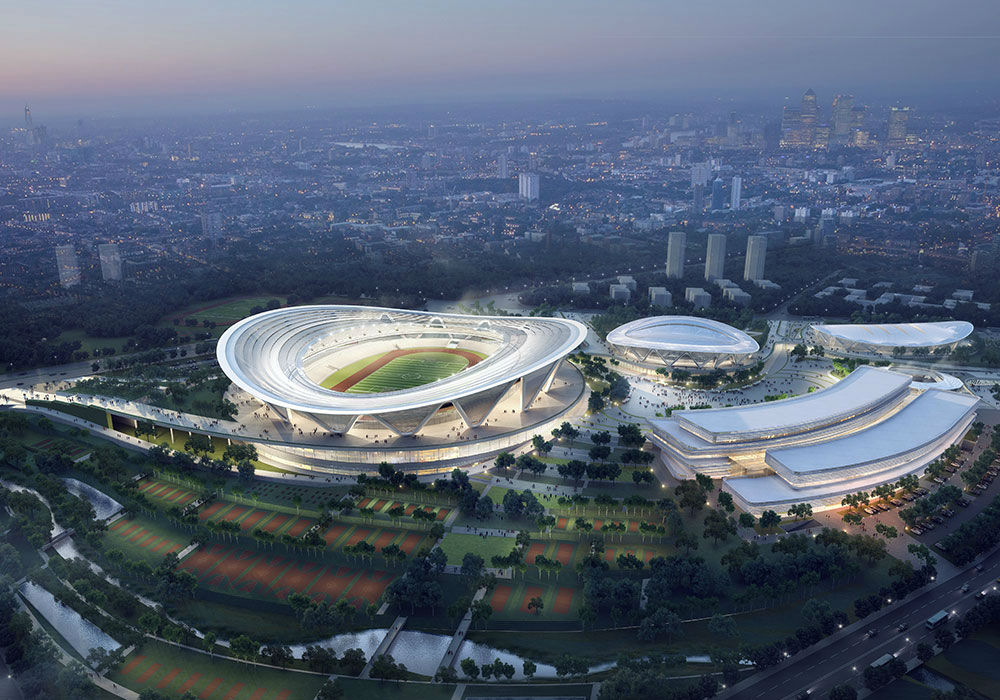 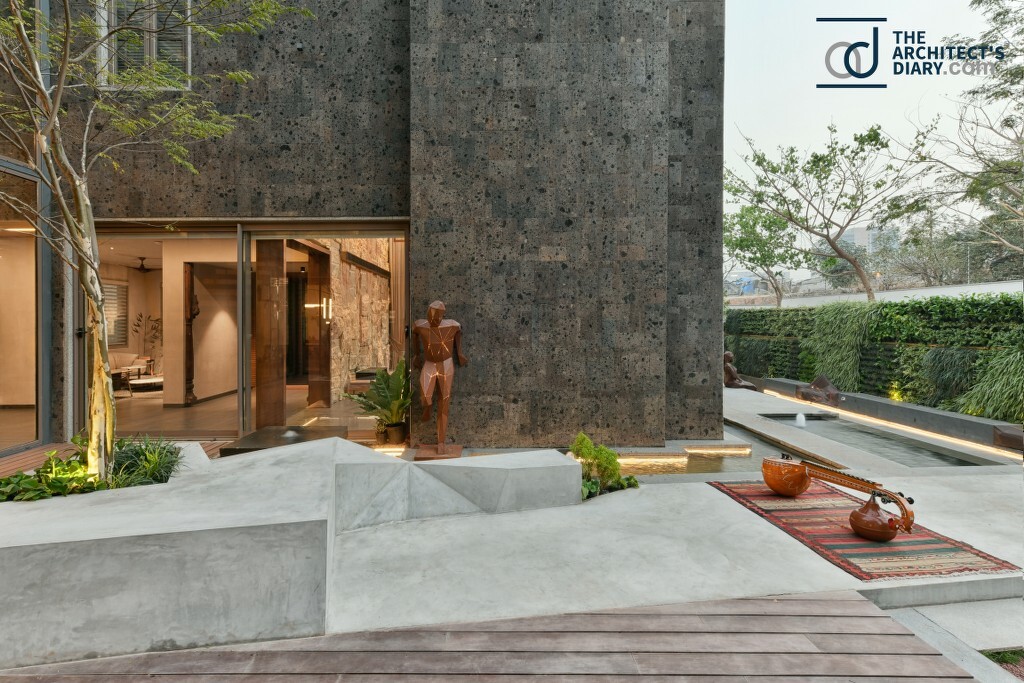 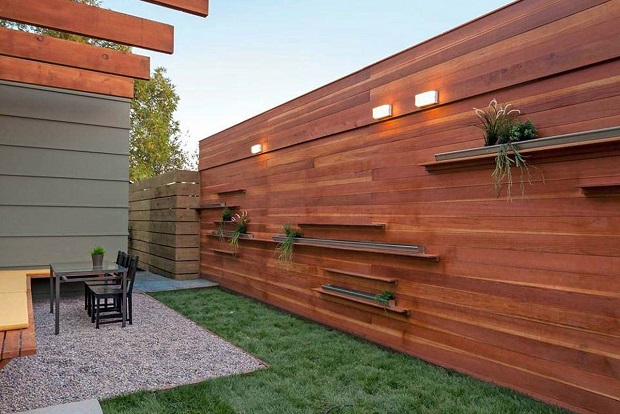 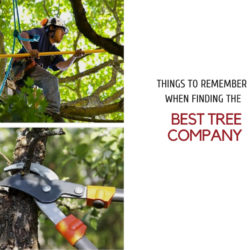 Things to Remember When Finding the Best Tree Company 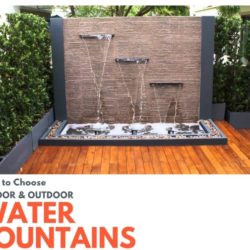 Why to Choose Indoor And Outdoor Water Fountains 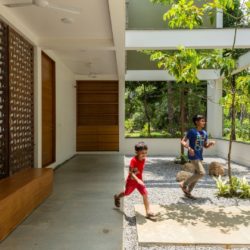 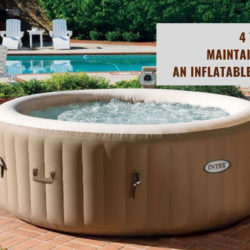 4 Tips to Maintaining an Inflatable Spa