This project was built in consideration of the preferences of Mr. Hiteshbhai Gajera. Because the client is from Jetpur and in textiles, the foundation of the design was laid in the Bandhani work that seemed to be an intrinsic part of the textile industry and close to the origins of the client. 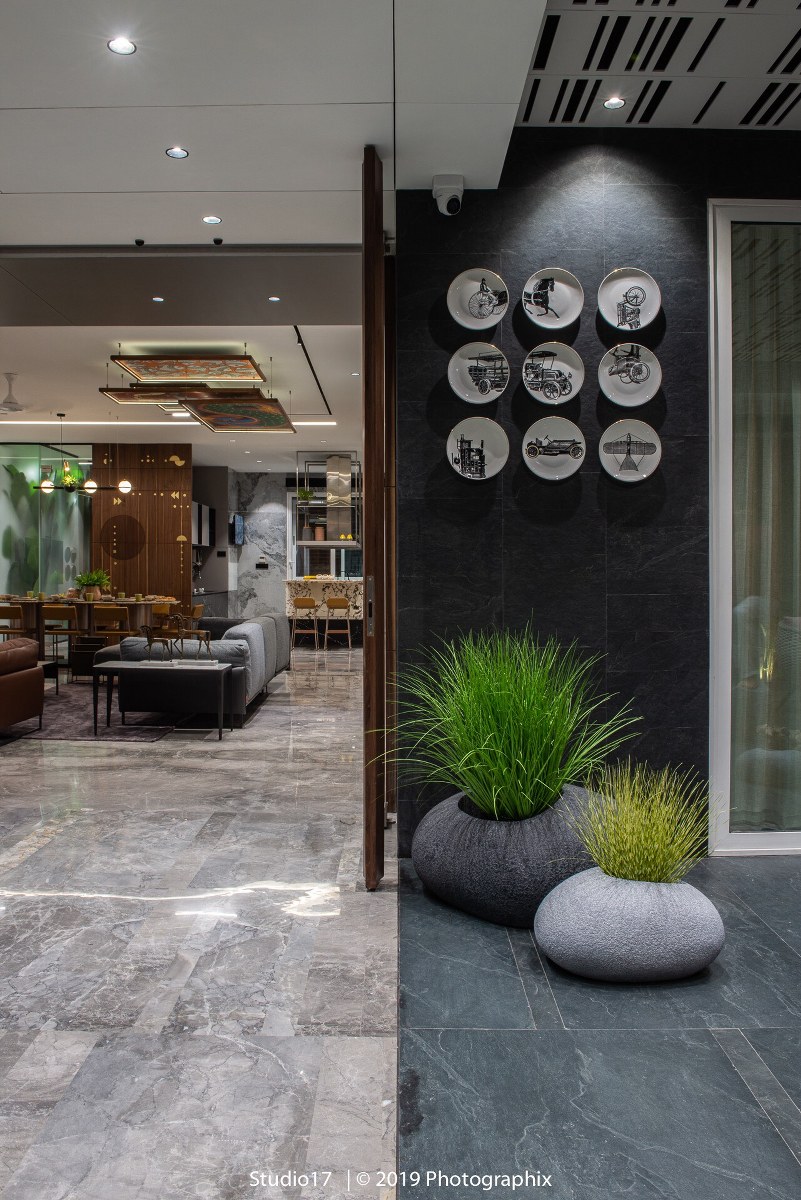 The nature of the visual patterns observed in Bandhani was prominently geometric, which is what inspired the recurring geometric patterns seen throughout the house. During the conception of the idea of Bandhani patterns as the ground concept of the design, the idea of subtly incorporating the five elements of Earth, in the components of the house that visually affect the mind, like the artwork around the house, the colors of the walls, and the likely, also including plants, water fountains. This emerged after the client’s mention of their desire to have pieces of nature all around the house. 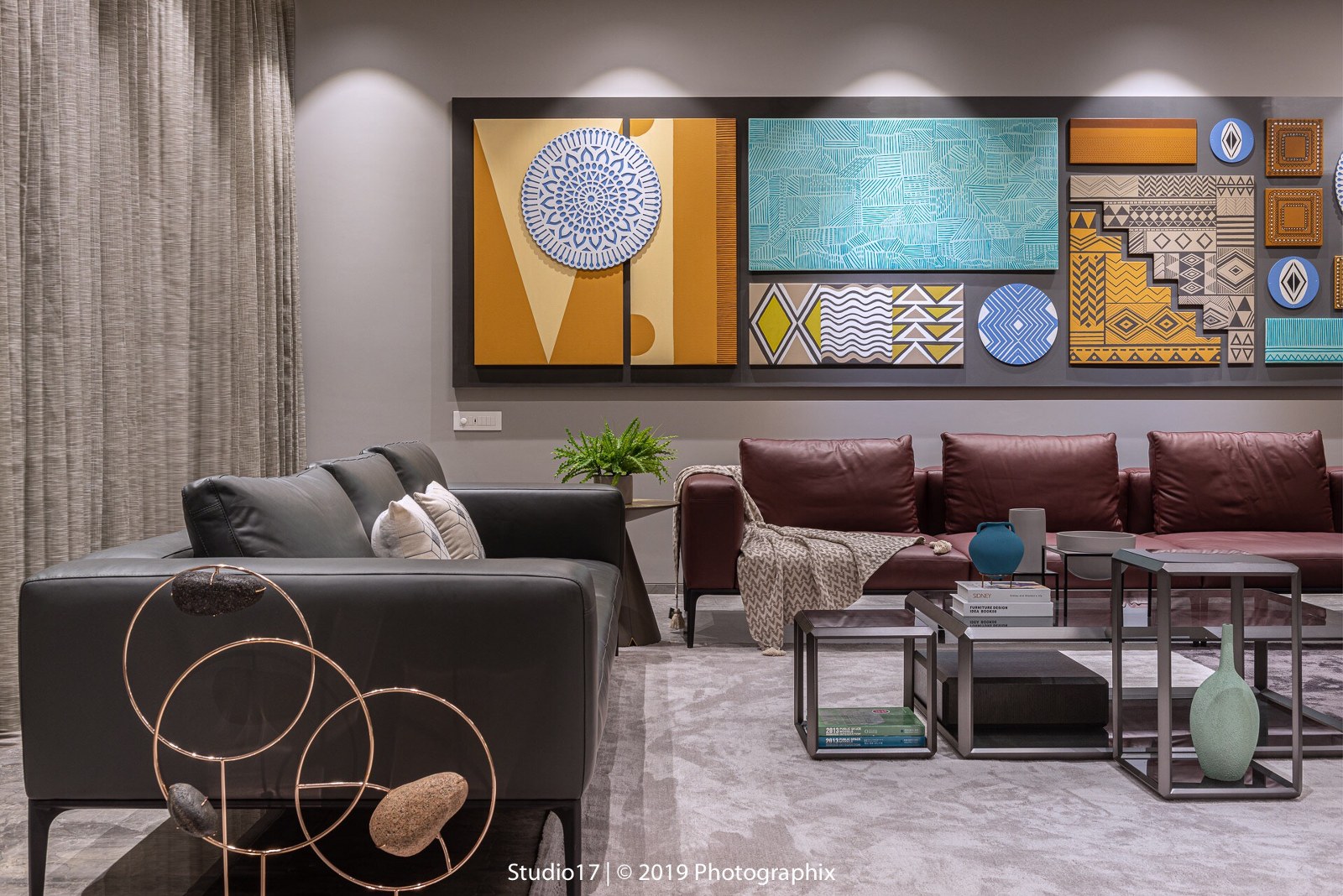 You begin to witness the inspiration of the design right from the front door, the geometric pattern derived from the base of Bandhani work serves as an abstracted design after putting Bandhani work under the creative process. After entering the house, you witness a Foyer niche that has an art installation depicting the five elements on earth in a traditional art medium. A corner curated to become a mental curtain to ease you into the semblance of the house.

A visual element is introduced upon entering the formal living room, consisting of a fabricated lush green plantation, which can be glimpsed through a translucent glass as a symbol of the collaboration of contemporary design and nature and a subconscious content of the presence of greenery in the prominent part of the house. 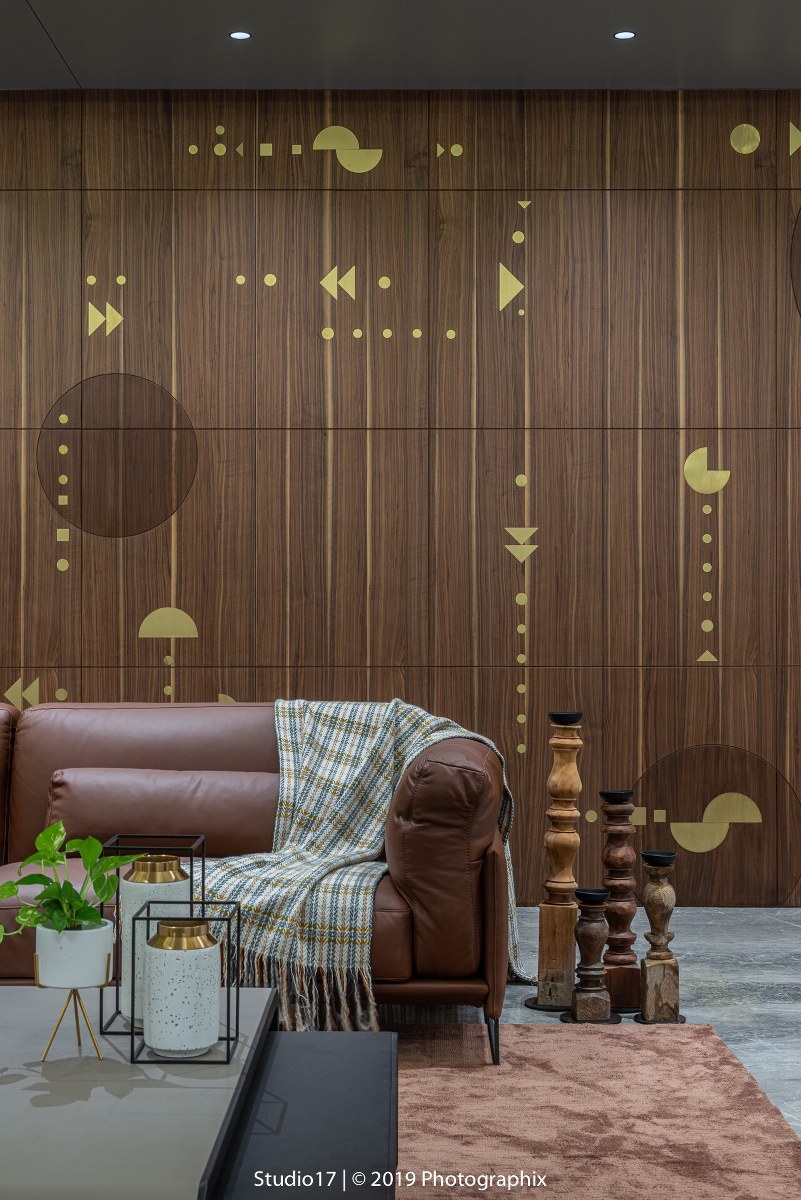 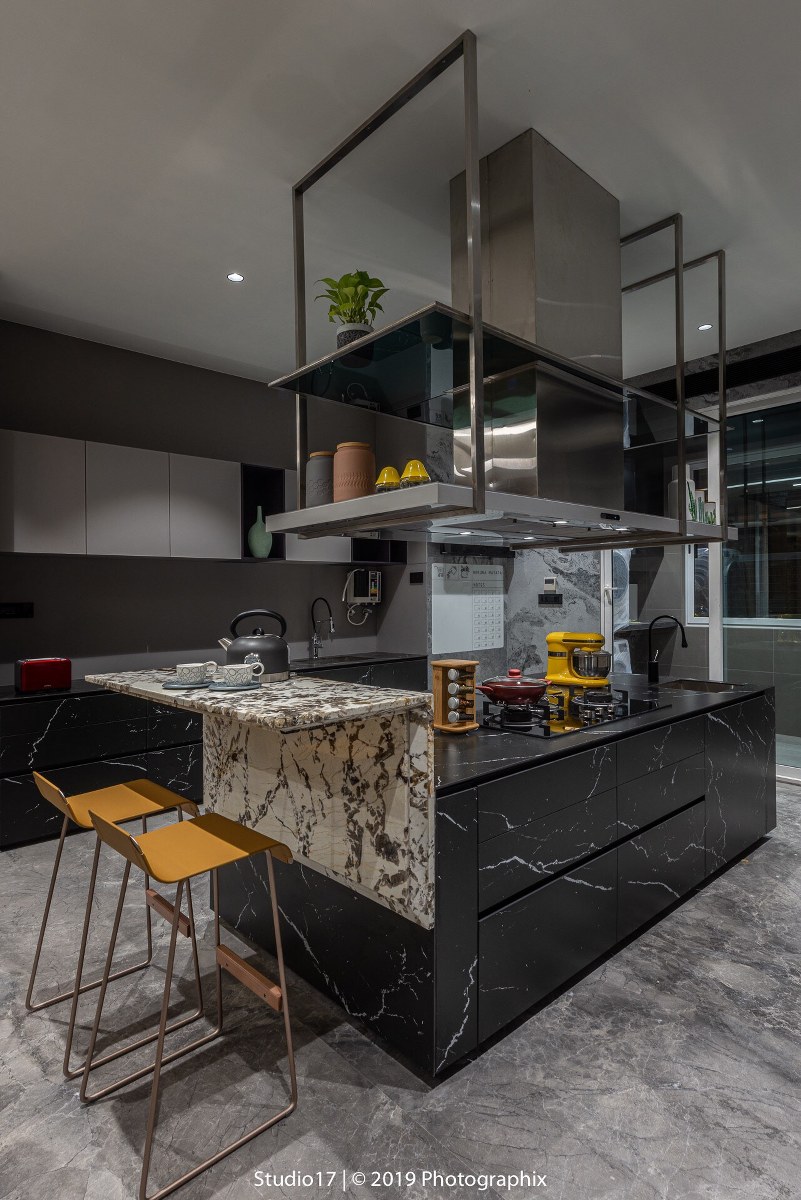 The design includes a formal and informal living room space, which provides the option of a division of guests accordingly. The usage of Brazilian stone in the formal living room forms an essence of exclusivity as one of the prominent features of this stone is that no two productions have a recurring style.

Moving into the informal living room, you notice that space appears to be more snug. An intriguing part of this space is the ceiling art installation of paintings that bear resemblance to the traditional Indian prints. There is a playful difference in the heights that these paintings are placed in and an arrangement made such that each painting is visible as you move around the room at different points. This arrangement creates a subtle curiosity to try and peep each painting by moving around the room. 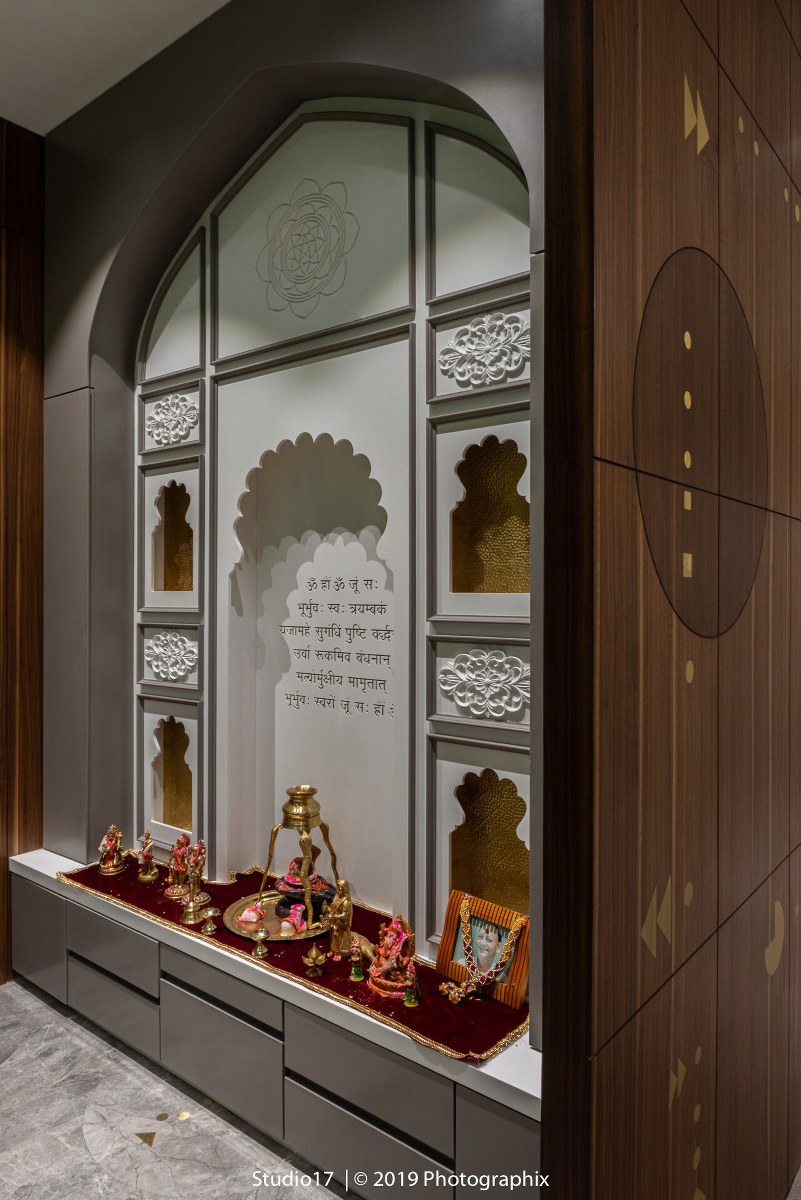 An essential part of keeping the client’s origins as a part of the contemporary house design was the connectivity of the spaces. The outdoor spaces in the house are used at their utmost connective capacity. The guest room outdoor space has been given access from the formal living space, the mother’s room. And the larger outdoor space can be accessed from the Master bedroom, the children’s room, and the informal living room. 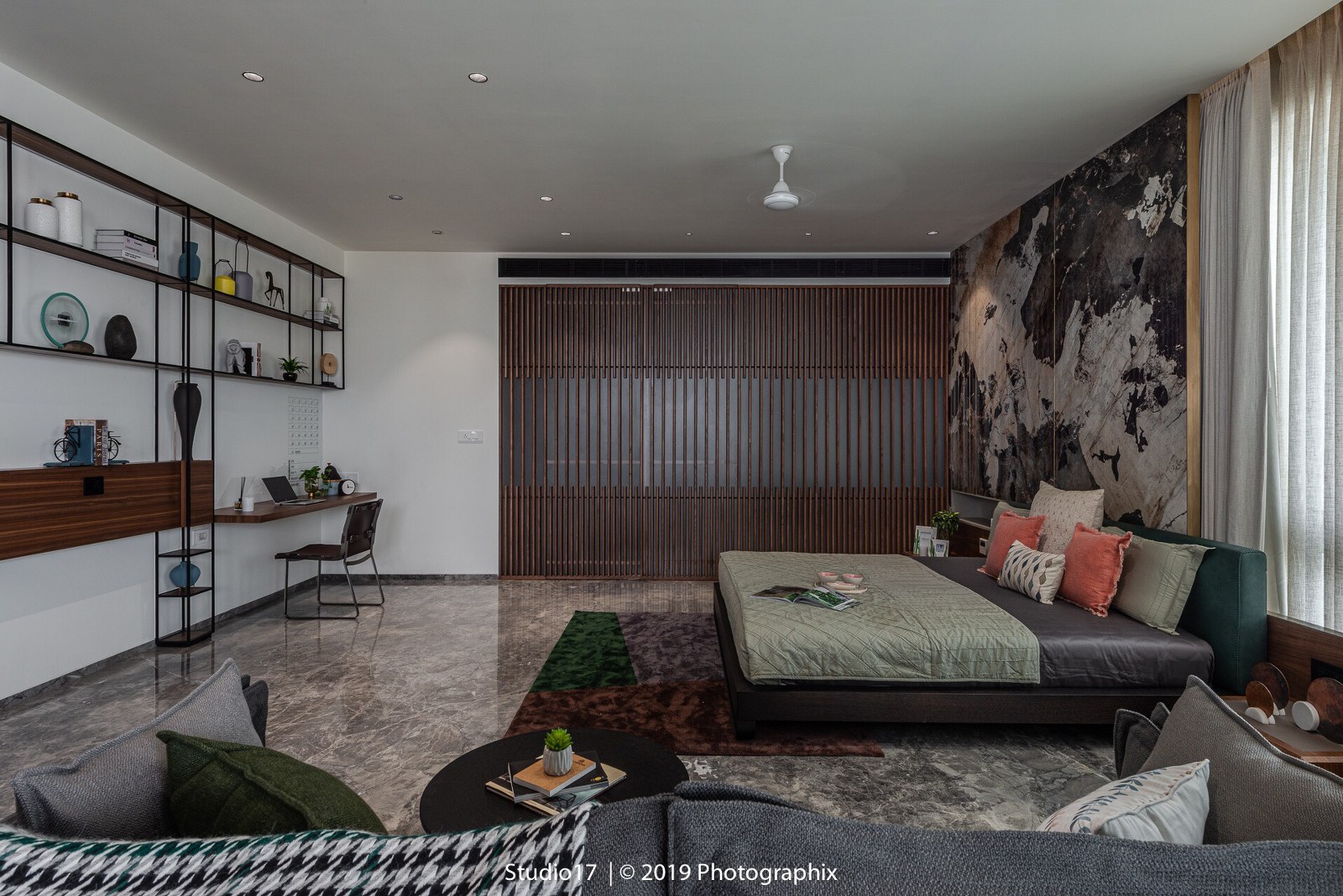 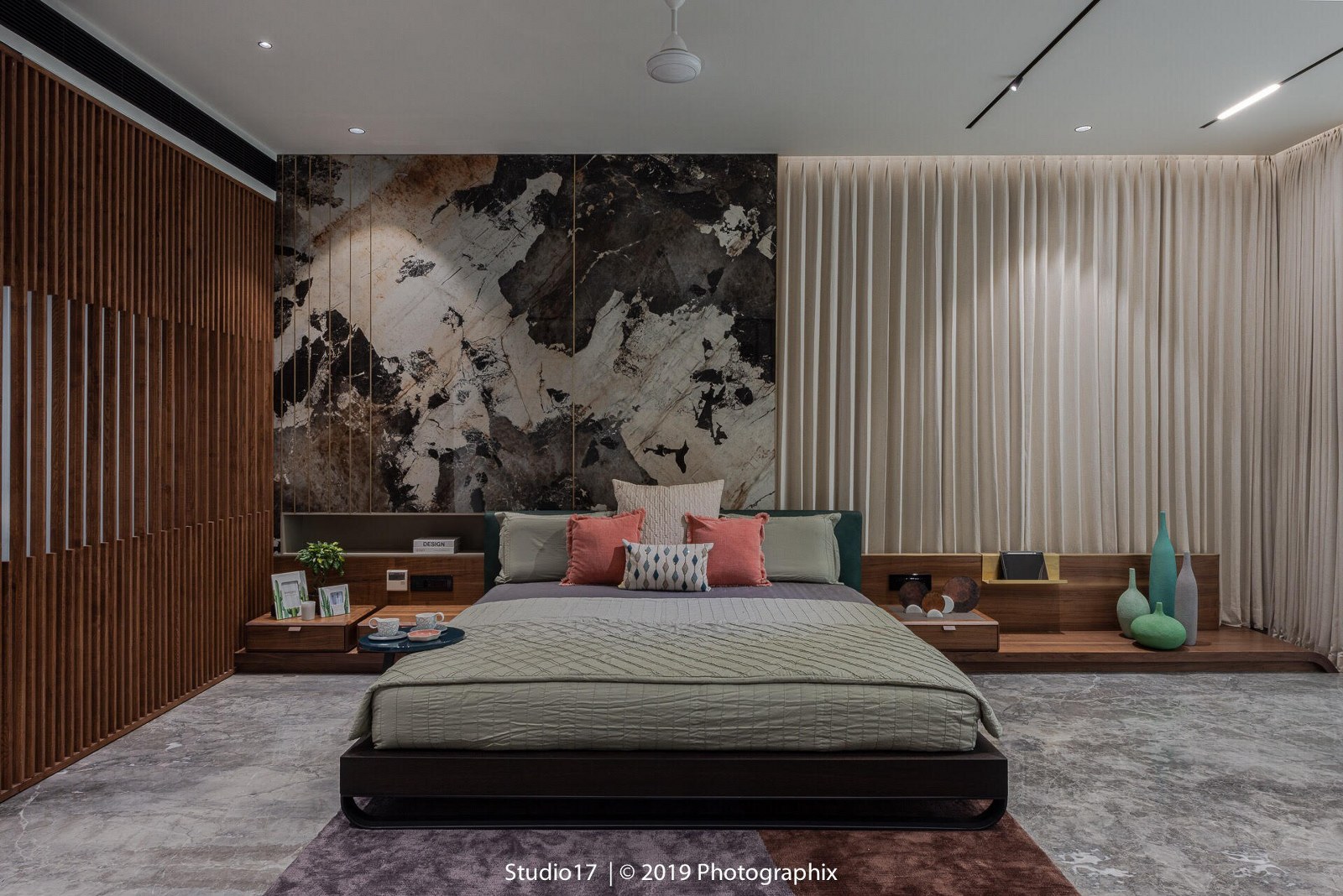 The children’s room although has categorized spaces for study and informal spaces, the categorization is not too overwhelming, neither are the colors in the room, although a small pop of primary colors is used. Their study has a back-painted glass planner on the wall, with a map of the world, as an aid to the children’s schedules and studies. 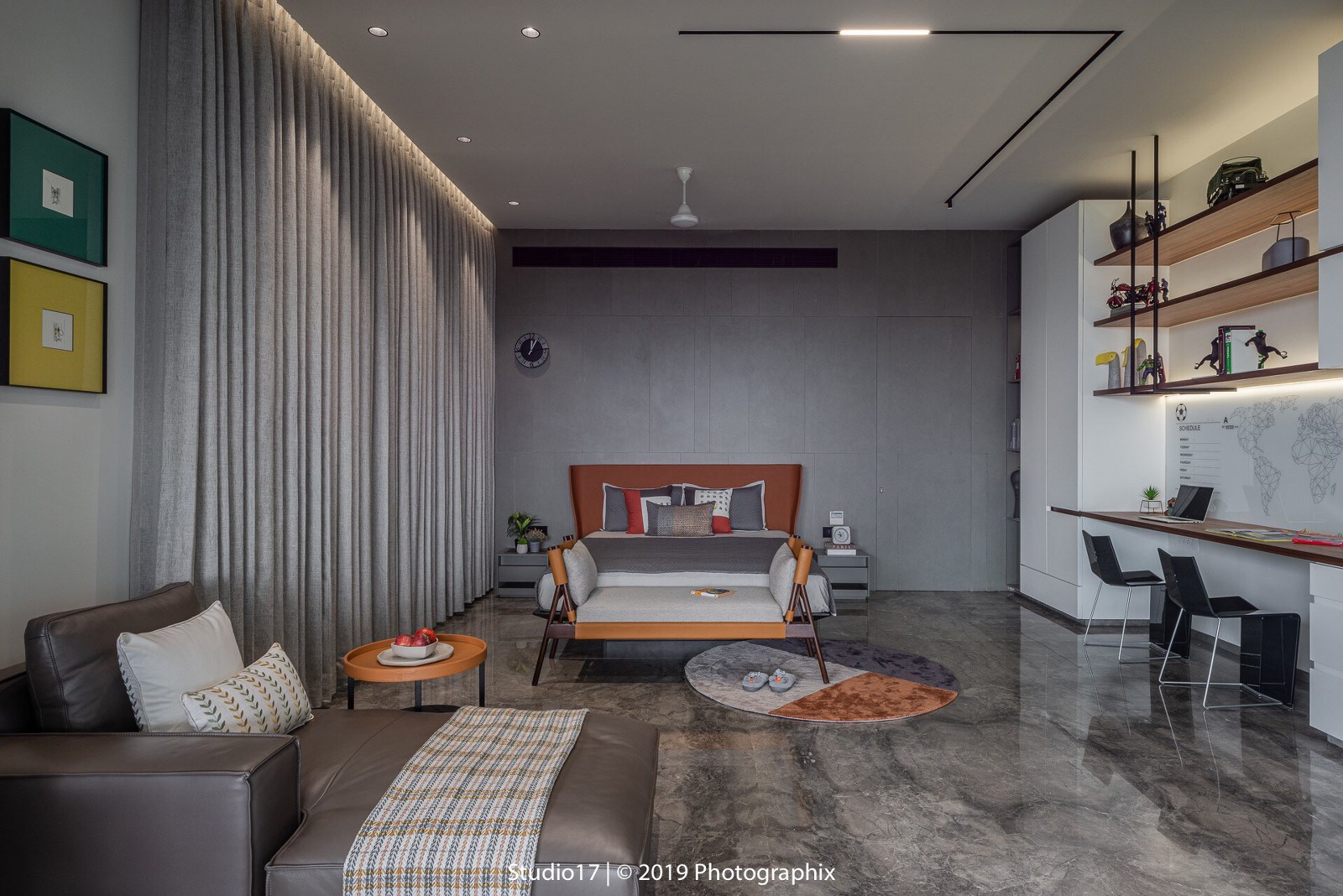 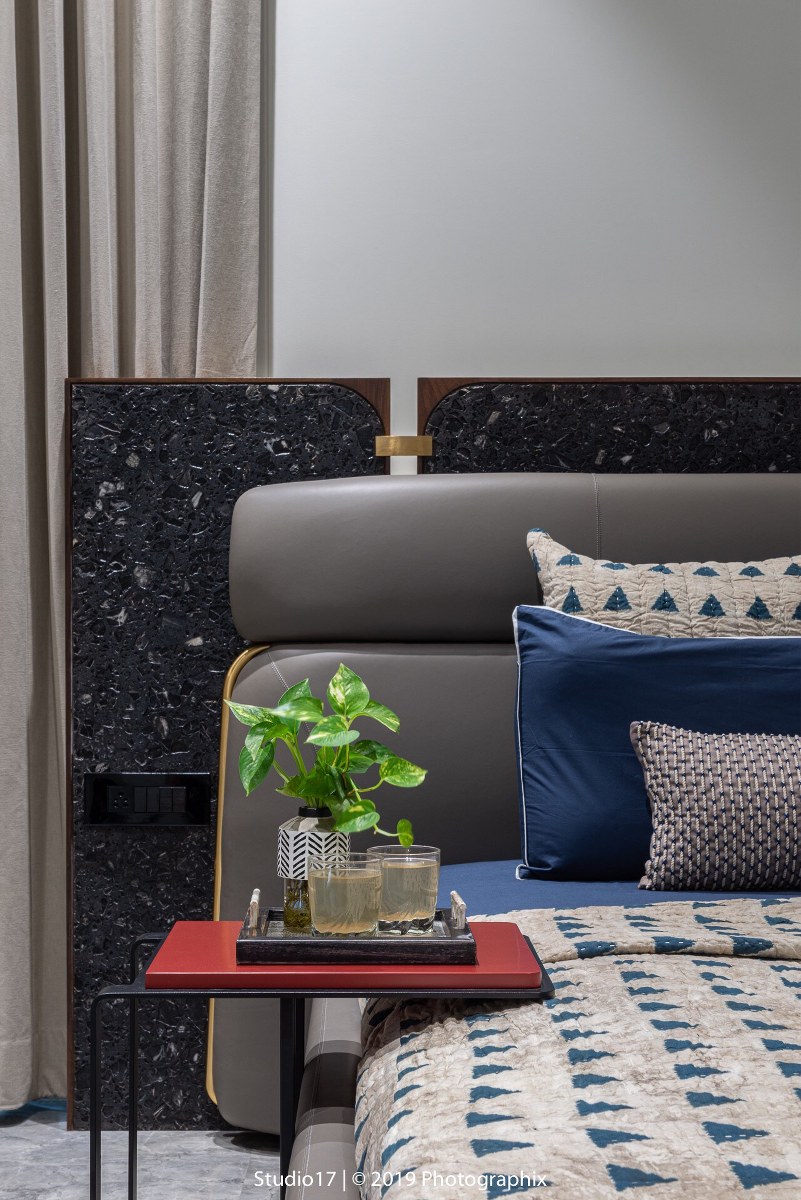 The mother’s room is curated in a way, to make her reminiscent of the village they originate from. A mural made by using fabrics that are mostly seen in their village is placed in a way she witnesses it every day as she wakes up, a similar fabric used for the bed covers. 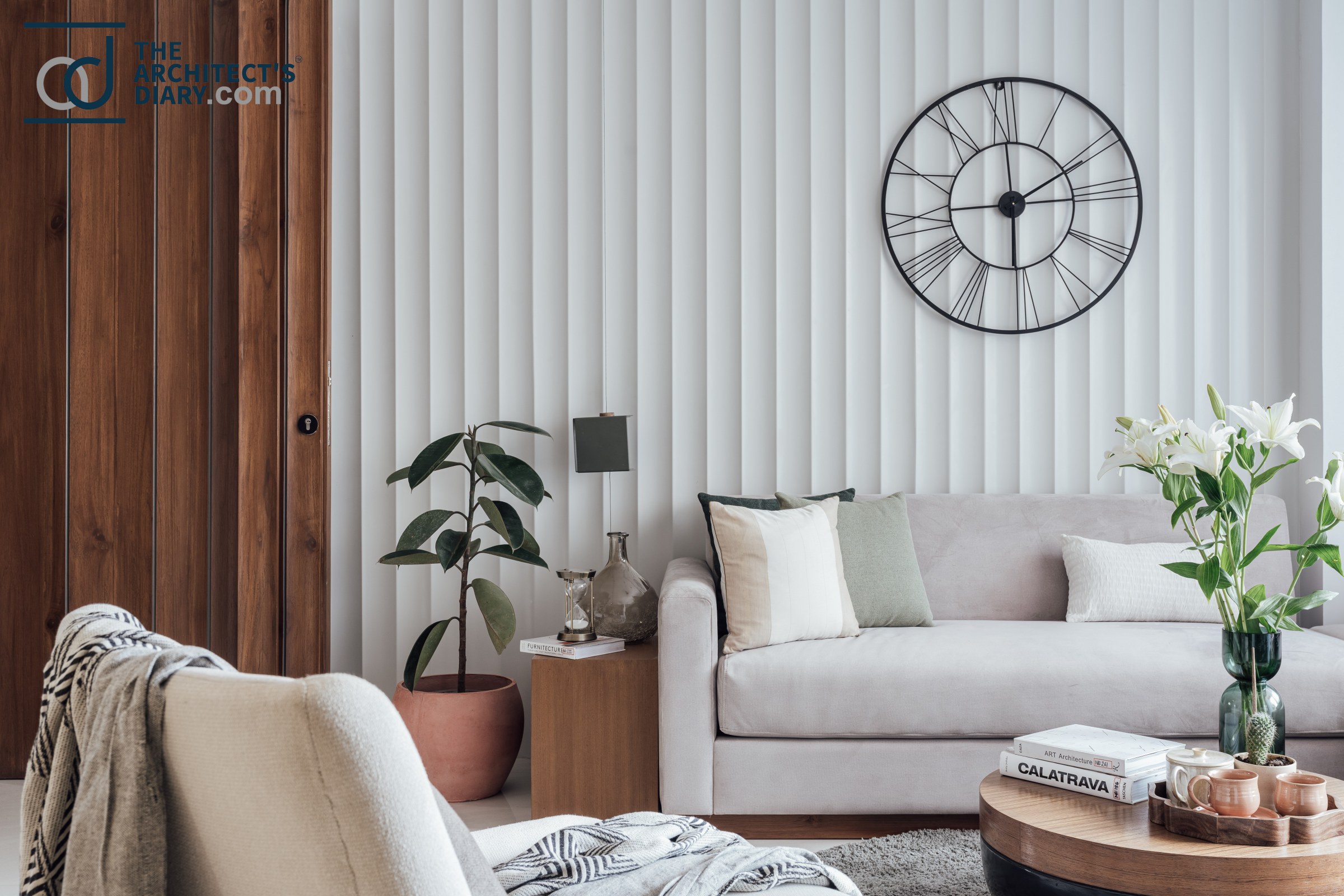 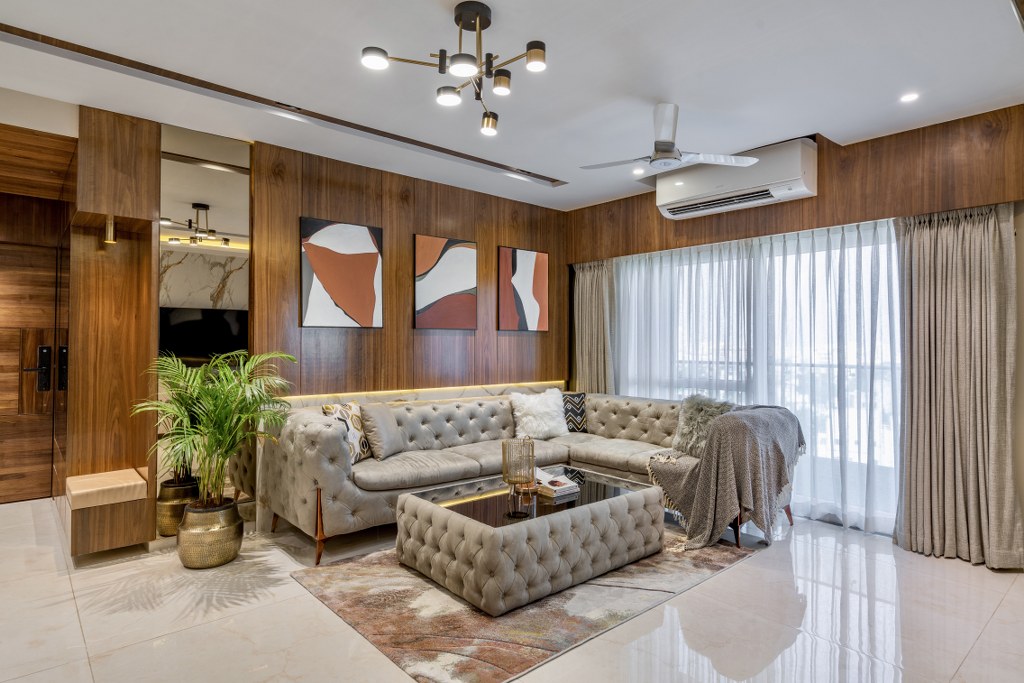 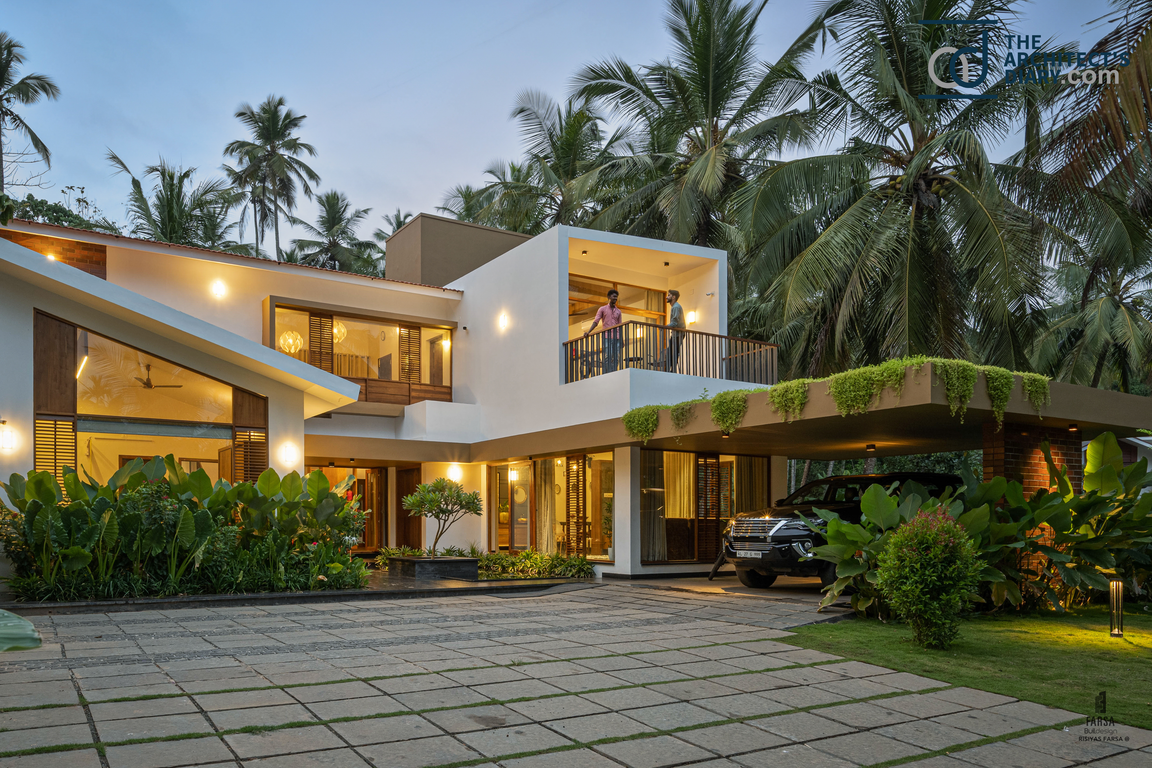 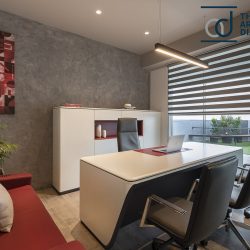 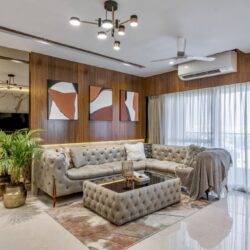 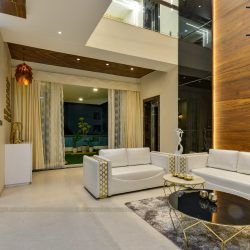 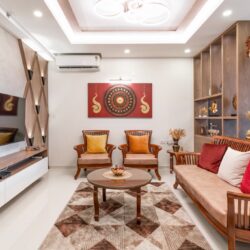 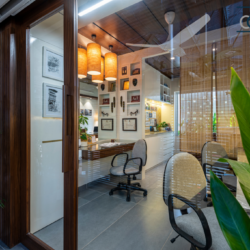